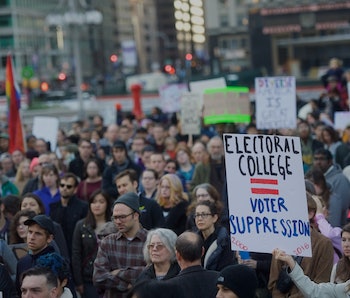 On November 8, Donald J. Trump beat Hillary Clinton in the electoral college to win the presidency. Current projections show Trump with a 74 vote lead. But some die-hard Democrats aren’t giving up, clinging to the last hope of avoiding a Trump administration: faithless electors. There are 21 states where it’s legal for electors to switch their vote, a scenario that would result in a loss for Trump. Online activists are seizing this opportunity to demand that their electors do just that.

Many of the electors have Twitter accounts, and over the past few days the tweets have started rolling in. Individuals from their states have expressed their dissatisfaction with the results of the election, demanding their state’s electors flip their vote to ensure that Trump doesn’t become president.

Coming directly for politicians on social media has become more popular as a means of activism. While there’s concern that simply posting on Facebook or tweeting doesn’t do much for a cause, a 2015 report from the Congressional Management Foundation found that for many cases it took fewer than 30 Facebook comments or tweets to get a staffer to take notice of the issue. Then again, these electors will decide the next president of the United States. It might prove an uphill battle, but those who oppose Trump are putting in the work.

Perry O. Hooper, who represents one of Alabama’s nine electoral votes, is among those who’ve been petitioned. People aren’t pulling any punches, either.

Tweets are coming in of all shapes and sizes, with posters acknowledging the precedent-breaking nature of their request. Still, they say, situations like this are the reason the electoral college exists in the first place.

Electors from the swing state of Florida, which controls 29 electoral votes, could prove particularly valuable if convinced to switch. Activists are appealing to them by citing the outcome of the popular vote, which currently favors Clinton by about 1 million, as well as the interests of minorities within the state.

Electors Larry Ahern and Sharon Day have both received tweets carrying this message.

Some activists have chosen to take a different approach. They’ve asked their electors, like Jennifer Locke of Idaho, to vote for any Republican but Donald Trump.

While a vote for a Republican other than Trump would certainly be a statement against the bigoted rhetoric of Trump’s campaign, it wouldn’t do much to bolster Clinton’s chances. She would need 38 more votes to reach 270. That’s more than half of Trump’s existing lead.

More like this
Innovation
Jan. 19, 2023
A robot choreographer reveals why M3GAN — and all robots — should dance
By Molly Glick
Culture
11 hours ago
Lost Jumped the Shark by Breaking Its Most Important Rule
By Jake Kleinman
Culture
13 hours ago
Final Destination 2 Perfected the Art of the Gross-Out Kill
By Jon O'Brien
LEARN SOMETHING NEW EVERY DAY.
Share: