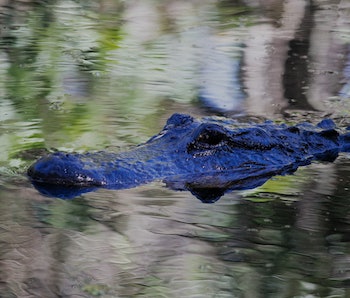 In October, now president-elect Donald Trump announced that not only did he want to make our country great again, but he also wanted to make Washington honest again. How did he plan on doing that? By “draining the swamp”, which essentially means he wants to rid the capital of crooked politicians. His plan, however, makes zero geographic sense because it’s a common misconception that D.C. is a swamp.

Draining swamps was once used as an effective means of killing mosquitoes that spread diseases, such as malaria. The phrase “drain the swamp” was first used to describe Washington back in 1903 when Winfield E. Gaylord — a democrat from Wisconsin — wrote that socialists wanted to “drain the swamp”, riding Washington of capitalist ideas.

However, Trump probably borrowed the phrase from a 1980 speech by Ronald Reagan, where the former president wanted to eliminate wasteful government spending, by “draining the swamp”.

That’s hard to do when Washington isn’t even built on a swamp. The city was built in a low-lying area between the Anacostia, Potomac, and Tiber rivers, and as urban historian Don Hawkins tells the Washington Post only about two percent of the land (in the original boundaries from 1792) can be classified as a swamp. It’s actually more of a tidal basin, as DC Curbed points out, which means the area was once a wetland with different types of reeds and grasses.

Periodic flooding and poor city planning have helped perpetuate the myth that D.C. was built on a swamp. Visitor to the city expected to see gorgeous landscape views surrounding the capital but were instead treated to views of the swollen Tiber river, which overflowed during heavy rains, leaving the area where the National Mall is water-logged. The river was ultimately turned into a channel to direct sewage and garbage away from the city. As it flowed past the White House, the drainage brought with it a swamp-like odor, thus perpetuating the myth that D.C. was a swamp.

While draining a political swamp may sound like a great idea, environmentally speaking, draining a swamp is one of the worst things you can do as it takes necessary water away from local plants and animals, that need it to survive.

More like this
Science
23 hours ago
Millions of People Are at Risk of This Rare Climate Change Threat — Study
By Tara Yarlagadda
Science
15 hours ago
Ancient Neanderthal Leftovers Reveal How Skilled Our Distant Cousins Were
By Miriam Fauzia
Science
19 hours ago
Astronomers found a ring around a distant object in space — and it’s acting strange
By Doris Elín Urrutia
LEARN SOMETHING NEW EVERY DAY.
Related Tags
Share: