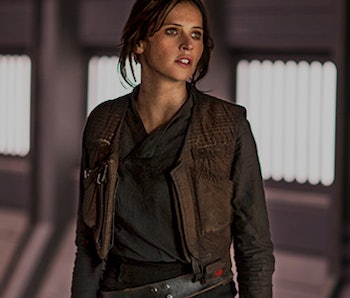 It seems the Force will be strong with a few characters in Rogue One. A new international trailer for the first standalone Star Wars movie just dropped and we finally have our first look at Jyn Erso’s mother Lyra Erso as well as what look to be the Kyber crystals that give the movie’s heroine her Force-sensitive motivation.

Early on in the trailer when evil Director Krennic comes looking for Galen Erso (Mads Mikkelson), the younger Jyn must be whisked away to safety. “Whatever I do I do it to protect you,” Galen tells her. Then we cut to our first look at actress Valene Kane as Lyra who gives her daughter a parting gift.

“Trust the Force,” she tells Jyn before giving her a necklace, which seems to be made of what we can only assume is a Kyber crystal. This is a big deal for a few reasons.

First is that one of the most persistent rumors about Rogue One so far has been that the mystical Kyber crystals — which also give lightsabers their powers in Star Wars mythos — will be the key component in creating the deadly Death Star laser.

It makes sense that the scientist Galen would be experimenting with the crystals, Krennic and the Empire would come looking for him to help them harness the crystal power, and force him into using it for their evil ends. It connects the crystals and Jyn in a nice narrative way to give her some personal stakes in her mission.

The second is that Lyra seems to be Force-sensitive. In the pre-A New Hope timeline, the Jedi are all but extinct, but that doesn’t mean the Force doesn’t exist. Jyn might have a relative with Jedi potential, which would make any Star Wars fan perk up a bit. Maybe she even has a lightsaber tucked away somewhere in the Erso homestead just like old Ben Kenobi in A New Hope.

Rogue One hits theaters on December 16.