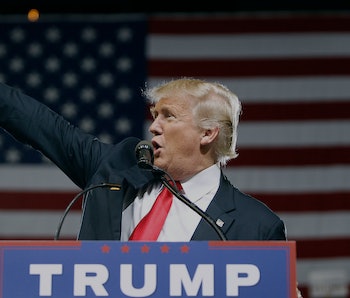 Donald Trump has been elected as the 45th President of the United States. There are many questions about what might happen when he takes office in January, but the one likely to affect the most people will be his stance on digital privacy. Most people have a smartphone, use the internet, or rely on email to communicate. But those technologies can all be used to spy on their owners.

Trump has repeatedly said things which raise questions about his views on privacy. He said Apple should help the FBI gather information from the San Bernardino shooter’s iPhone, for example, and that he “errs on the side of security” when it comes to National Security Agency spying.

This led experts, commentators, and security-themed parody accounts alike to call for people to up their security after the election. Here’s what you can do right now to protect your privacy under Trump.

Efforts from Facebook, WhatsApp, and indie apps like Signal make it easier than ever to use end-to-end encryption when you chat with people. This makes it far more difficult for anyone to read those messages without your say-so.

Tor is often associated with the so-called dark web, but it’s most commonly used to anonymize internet traffic. This way you can visit social networking services, blogs, and other sites without having to worry about your activities being monitored. It isn’t perfect, and the U.S. government often tries to de-anonymize Tor traffic, but it’s better than leaving a record of every website you visit by using something else to browse the web.

Just like your text messages, your email should be end-to-end encrypted. Look no further than Yahoo to learn why: The company put users at risk of government snooping and criminal hacks by leaving it insecure. Use something like ProtonMail or, better yet, OpenPGP to make it harder for anyone to read your emails.

4. Set up two-factor authentication (and don’t use biometrics)

You should set up two-factor authentication on every account you care about. This setup means you’ll have to input more information — typically a password and another code sent to you via text message, though you can also use backup codes and other tech, too — every time you sign in. Oh, and while you’re at it, stop using biometrics because they’re insecure, easy to trick, and police can legally force people to unlock their smartphones if they’re secured via fingerprints.

5. Cover up your smartphone and laptop camera

Barring the use of a special phone case made by NSA whistleblower Edward Snowden and Andrew “bunnie” Huang, your best bet for mobile privacy is to cover your camera with tape, or a more readily available phone case.