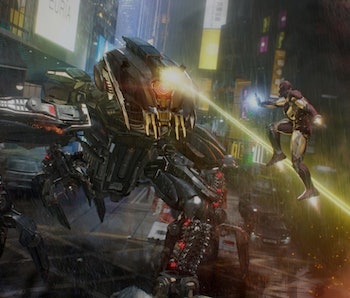 Disneyland theme parks are slowly transitioning into bringing more Marvel superhero experiences to parkgoers. The latest will be the “Iron Man Experience” at the Hong Kong Disneyland, and based on the previews, it looks absolutely amazing.

The “Iron Man Experience” in Hong Kong appears to be a virtual amusement park ride where riders will hop aboard the “Iron Wing,” essentially a large, flying, Iron Man suit/minivan hybrid. The story of the ride will be that attendees are testing out the new “Iron Wing” at the newest Stark Expo in Hong Kong. You’ll remember that the last Stark Expo was in New York City as depicted in the Marvel Cinematic Universe in Iron Man 2. However, during the “Iron Wing” demo, HYDRA robots invade Hong Kong and attempt to steal the Arc Reactor located atop Stark’s Hong Kong Tower.

Flying alongside Iron Man, riders in the “Iron Man Experience” will get to participate in a battle between Iron Man and some HYDRA machines right in the streets of Hong Kong.

The most interesting aspect of the ride personally, is actually the pre-show where audiences in line for the main attraction will experience a mini, live-action Stark Expo. As a moment of quasi-role playing experience, walking through an actual Stark Expo lined with Stark technology and props actually seems like a really cool idea.

Likewise, the fact that the “Iron Man Experience” utilizes its location by taking place in Hong Kong around a fictional Hong Kong Stark Towers makes the experience totally unique, and it might be worth a stop for tourists abroad. It also asks raises some questions about Stark’s real-estate holdings and how many Stark Towers the man actually has littered around the world. Did he get the land rights through some sort of art of dealing maybe?

The “Iron Man Experience” launches in Hong Kong Disneyland January 11, 2017. For North American Marvel fans, Disneyland California Adventure opens their own Marvel attraction, “Guardians of the Galaxy - Mission: Breakout!” in the summer of 2017.