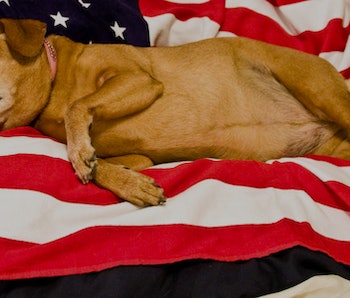 The United States is poised to elect a new president on Tuesday, and many Americans have lost their chill. During her Monday segment, comedian Samantha Bee called out the country’s nerves with a quick, straight-to-the-point quip: “I know you’re a wreck, you can’t sleep, you’re shitting blood, and you’re telegraphing your anxiety to your pets.”

And it’s true — you may not be shitting blood, but you are probably making your pets just as stressed as you are.

This is especially true if you have a dog. Dogs have evolved to understand our behavior, scanning our faces for critical information like, “Am I a good boy?” and “Are you okay, master?” A 2014 study conducted by the MTA-ELITE Comparative Ethology Research Group found that there is a specific part in a dog’s brain that’s dedicated to deciphering emotion in a human voice. The same region also processes information when they hear other dogs, meaning that they interpret human emotion in the same context in which they interpret dog emotion.

“Like people, dogs use simple acoustic parameters to extract out the feelings from a sound,” lead author Attila Andics told NPR. “For instance, when you laugh, ‘Ha ha ha,’ it has short, quick pieces. But if you make the pieces longer, ‘Haaa, haaa, haaa,’ it starts to sound like crying or whining. This is what people — and dogs — pay attention to.”

Research on how our emotions actually affect dogs, however, is sorely lacking. Currently, most of the evidence we have is anecdotal. While it’s true that people romanticize their relationship with animals and can use that relationship for their own emotional therapy, there are multiple case studies of stressful situations like divorces and owner death that have led to dog depression.

Scientists think it’s likely that dogs are so aware and reactive to our emotions because they have been our companions for so long; it’s thought that dogs began to be domesticated over 30,000 years ago.

There’s not enough research to tell whether other animals are affected by our emotions. We know that some animals, like horses and cats, can read our emotions. A small study on 12 cats did find that cats acted happier when their owners were happy, but it was unclear whether the cats were actually happy or whether they just understood that happy owners were more likely to lead to tummy rubs and treats.

But we are steadily coming to understand that animals can feel emotion. Research has been slow because for decades the prominent belief was that associating animals with emotions was unscientific. An increasing number of scientists, however, theorize that at least some animals feel a full range of emotions, such as jealousy, love, and embarrassment. Think about that as you begin to pace and yell at the news this evening — if you can’t relax for your own sake, at least do it for your dog.

More like this
Science
5.8.2022 1:00 PM
Should you exercise your dog on a treadmill? Here's what veterinarians say
By Tara Yarlagadda
Science
5.20.2022 1:00 PM
How do dolphins maintain their glowing skin? A study reveals the surprising answer
By Jennifer Walter
Science
5.20.2022 12:00 PM
Look: Hidden fossils reveal a microscopic creature that may be resilient to climate change
By Jennifer Walter
Related Tags
Share: