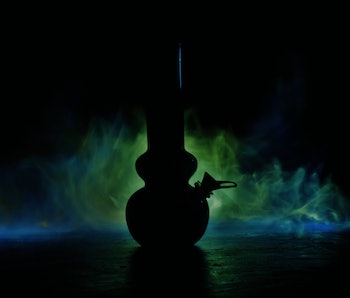 Where there’s weed, there’s (probably) a bong. But what exactly does a bong do?

First things first: the construction of the bong. Bongs are a little like humans: They’re diverse, come in all shapes and sizes, but basically all perform the same role. As you probably know, you can make bongs out of all kinds of stuff: apples, soda bottles, glass jars — the biggest constraint is pretty much just your imagination. But glass is ideal because — outside of being a malleable substance that can be hardened into any damn shape you please — it doesn’t absorb anything, nor does it infuse your precious weed with any other odors. The same can’t be said of things like wood or fruit, which can problematically alter pot’s flavor profile. This neutrality makes it the most sensible and commercially viable choice. If you use it a lot, of course, you’ll get a brownish residue accumulating on the glass because the cannabis molecules will condense onto it, but a glass bong won’t be adding or subtracting anything to whatever you put into it.

Once you’ve packed your fresh weed into the bowl and begun to inhale, a combustion reaction burns the marijuana leaves and makes the water in the bottom bubble. The particulates remain, while the smoke — the part you actually care about — rises, filters through the water, rises up through the chamber, and wades into your waiting lungs.

But that water does more than just filter your weed to its most potent state. “I think the most important reason for the water is just to cool it all down, the cannabis,” said Dr. Lester Grinspoon, an Associate Professor Emeritus of Psychiatry at Harvard and a major proponent of marijuana legalization since the 1960s. “People make too much of the heat issue. I don’t think temperature is a problem, but nevertheless it’s nice to not have anything very hot going into your lungs.”

If you consume marijuana through a joint, you get everything - the cellulose and the rest of the vegetable material and whatnot. When you smoke through a bong, it’s a cleaner, more precise smoke, because you’re just getting the pure THC — a key component of what gives you that characteristic high.

A side-note: Vaporizers operate like mini-bongs, in that they can also be set to specific temperatures to incubate the best high, kind of bong-like. Grinspoon prefers setting his to 412 degrees, though often people like to set theirs lower, more in the 350-degree range. “People believe that in that [temperature range] there’s a different constellation of cannabinoids that pop off,” Grinspoon said. “Frankly, I don’t think there’s really a difference.”

One thing’s for sure: If you’re looking to elevate your smoking experience, you can’t go wrong with a bong.

More like this
Science
17 hours ago
How are drugs absorbed in the body? The science of medicine, explained
By Tom Anchordoquy and The Conversation
Science
6.27.2022 11:00 AM
Letting your cat go outside could spread “life-threatening” parasites — new research
By Amy Wilson, Scott Wilson and The Conversation
Science
6.26.2022 11:00 PM
The powerhouse of the cell has a more complicated origin than we thought
By Viviane Callier and Knowable Magazine
Related Tags
Share: