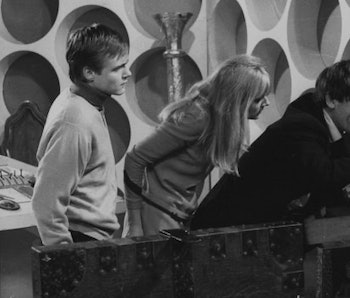 The Second Doctor was thrown into battle with his sworn enemies, the Daleks, as soon as he regenerated. “The Power of the Daleks” marked the Doctor’s first regeneration in the classic Doctor Who series, and this month, modern audiences will finally get a chance to see one of the previously lost original Doctor Who adventures in theaters.

The Doctor’s first regeneration was, at the time, a marvel. The screen cut to white for just a moment, and suddenly there was a new face and a new personality on screen in the form of Patrick Troughton’s Second Doctor. The creators of Doctor Who didn’t even call it “regeneration” at the time, as the mythos for the Doctor hadn’t been invented yet. The show was still young, only in the beginning of its original 26-season run, and hadn’t even figured out yet that the Doctor was a Time Lord from Gallifrey.

BBC News conducted an interview with Wills about her time on Doctor Who and the transition between working with Hartnell and working with Troughton.

She called Troughton’s performance “adorable,” saying, “Bill [Hartnell] had become very difficult to work with we had to be very generous and kind and pick up his lines. The thing about Patrick was that he had no ego. That was an astounding thing. I think his performance in this story is the most astounding of all the Doctors — and I’ve watched them all.”

While Wills may be a bit biased, there’s no doubting the importance of “The Power of the Daleks” in Doctor Who’s history. The “new” episode will be in theaters in two weeks. It runs for two and a half hours, and has been planned by a collaboration between Fathom Events and BBC Worldwide. If you go online and get your tickets, you’ll get to see the Doctor’s first regeneration and his taking on the Dalek’s on the planet Vulcan alongside companions Polly and Ben.

Tickets are available on Fathom Events’s website for Monday, November 14.