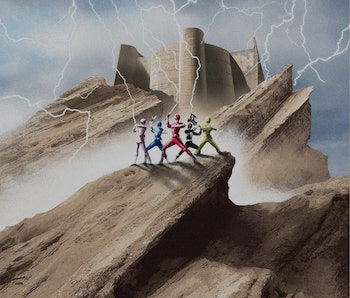 This November, Power Rangers fans hungry for the 2017 film can pre-order the original show’s soundtrack on vinyl for the first time ever.

Power Rangers: The OG Soundtrack, a new album from iam8bit, reissues the out-of-print Mighty Morphin Power Rangers The Album: A Rock Adventure from 1994. Every track from composer Ron Wasserman comes remastered, and the record itself is coated in rainbow splatter, fitting snuggly in a slipcase with art from illustrator JC Richard. The vinyl will cost $25, and pre-order begins November 4 for shipping Q1 2017.

The original 1994 album, which contained songs from the TV series like “We Need a Hero,” “5-4-1,” “Combat,” and “Go Green Ranger Go” — and yes, that amazing theme song — included sound effects layered on top of the music. The new album keeps this intact but still remasters the music to suit the format.

The vinyl leads iam8bit’s “Retro Revival Art Series,” which taps into the “nostalgic stylings” of the Power Rangers that “made our childhoods so, so joyous.” They’re not kidding: JC Richard’s art for The OG Soundtrack dives deep into the Power Rangers universe, showcasing the five heroes in classic form in front of the Command Center. On the back, Rita Repulsa is accompanied by her most formidable henchmen: Goldar, and his war machine Cyclopsis, the Mighty Mantis, and Lokar. And of course, there’s the Megazord, ready to battle.

In addition to the vinyl, iam8bit has special items for the collection shipping in December: seven collectible pins, including the White Ranger, for $10 each, while an ultra-rare Rita Repulsa pin is only available when all pins are ordered as a set. A coloring and activity book sells for $12, six minimalist pencils in a set for $12, and three 36”x24” sheets of limited edition wrapping paper for $10.

Check out the images of the vinyl and the special items below. First, there’s the cover of the album ($25) along with a look at the rainbow effect on the vinyl itself.

Here’s the back, with the Megazord formed and Lokar looking ominously in the back. Rita’s staff is also seen on the bottom.

Here’s the coloring and activity book, sure to bring back memories of daycare for anyone who picks up The OG Soundtrack. It will sell for $12.

A set of six minimalist-designed pencils, modeled after each original six Power Rangers, will also go for $12.

And finally, wrapping paper! $10 for three sheets, perfect for the upcoming shopping season.

Power Rangers: The OG Soundtrack goes up for pre-order November 4 and will release in Q1 2017. All other items in the “Retro Revival Art Series” will ship December.