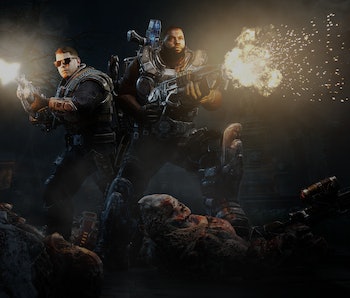 Can’t nobody save ‘em, but ‘em. El-P and Killer Mike, the rap duo known as Run the Jewels, are now playable in the multiplayer modes of Gears of War 4 through the latest paid DLC, Run the Jewels Air Drop. The two rappers are playable Versus Multiplayer and Horde 3.0 avatars, and the pack also includes 18 weapon skins, emblems, and bounties.

Both El-P and Killer Mike have lent their voices and likenesses to the game. Unlike Ice-T, who voiced Aaron Griffin in 2011’s Gears of War 3 (and whose metal band Body Count wrote and performed the song “The Gears of War” for the game’s end credits), El-P and Killer Mike portray themselves armed to the teeth in COG armor. They also only appear in the game’s multiplayer, and do not have a role in the story campaign.

On top of the inclusion of Run the Jewels, Gears of War 4 has also welcomed the return of two popular maps from Gears of War 3, Checkout and Drydock, reimagined to fit the new game’s setting. Both maps will be free and are available to Season Pass owners now while the rest of the community will have access on November 8.

The duo’s inclusion is part of a promotion for their upcoming album RTJ3, with a full North American tour scheduled throughout 2017.

More like this
Gaming
Jan. 24, 2023
Fortnite is about to get a Wild Dreams concert from The Kid LAROI
By Jess Reyes
Gaming
7 hours ago
Everything We Know about the Fire Emblem Engage Expansion Pass
By Jess Reyes
Gaming
21 minutes ago
Where to Find Every Weapon in Dead Space and Their Schematic Upgrades
By Joseph Yaden
LEARN SOMETHING NEW EVERY DAY.
Related Tags
Share: