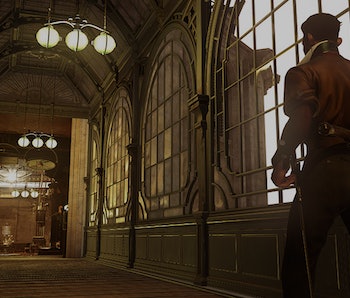 Dishonored 2 is coming, and we’ll all soon get to experience the continued adventures of Corvo and Emily in the Empire of the Isles, Arkane Studios’s steampunk — dieselpunk, maybe? … there’s an argument to be made — playground. It looks like it’s shaping up to be a worthy follow-up to the original, although we’ll have to wait to play through the whole game to pass any real judgment. Dishonored grabbed our attention with Dunwall’s brassy aesthetic and haunting automotons, and we’ll be looking for Dishonored 2’s Mediterranean-inspired city of Karnaca to do similar. For now, though, there are plenty of games offering similar steampunk aesthetics to hold you over until November 11.

Bioshock takes to the skies in its last entry, shedding its 1930s art deco vibe for Columbia’s Victorian steampunk stylings. It has everything an enthusiast could want: zeppelins, weird science, shifting gears aplenty, and steam machines. Much like Rapture, Columbia is a beautiful but irredeemably twisted world, although its themes regarding racism and gratuitous violence have been subject of heated debate. By virtue of its world alone, though, it’s just what you need to put you in the Dishonored 2 mood.

Final Fantasy VI, one of the finest in the long-running franchise, is an interesting high fantasy/steampunk hybrid with its ancient magics, magitek armor, steam-powered bosses, and haunted trains. With the exception of some ‘90s-era JRPG goofiness, Final Fantasy VI holds up quite well to the modern day, too, and it’s one of the first Final Fantasy games to really get into character development.

All right, I know that the Thief reboot was not exactly welcomed with warm fanfare. But that doesn’t negate the series’s legacy, or its position as one of Dishonored’s closest relatives. The reboot melds late-medieval and futuristic technologies and fits them into a Victorian-style steampunk world, making something quite unique. You get to explore this imaginative setting as you sneak through its nooks and crannies robbing the rich.

The masterful wordsmiths at Failbetter Games brought their gothic Fallen London universe to life with Sunless Sea. Sail across the dark ocean with your crew in search of treasure, but beware of the mysterious dangers lurking there. Of course, there’s also the typical pitfalls of madness and cannibalism for you to worry about. No one said being a ship’s captain was easy. If steampunk sailing isn’t your thing, do check out Failbetter Games’s browser and mobile game Fallen London for adventures on terra firma.

Machinarium took off in the early days of the recent surge of indie games back in 2009. You take on the role of a little robot who’s trying to get back to the city after having been unjustly thrown into the scrapyard. The graphics are lovingly hand-drawn, and while the world is drab in shades of rusty brown and faded yellow, it’s also absolutely beautiful. If that doesn’t grab you though, Machinarium’s well-conceived puzzles surely will.