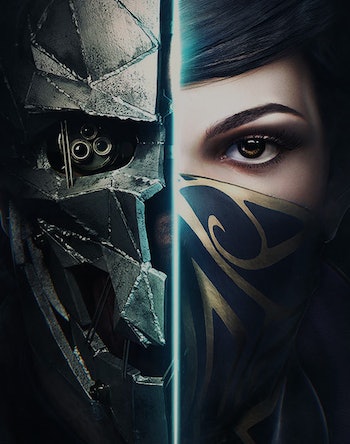 “Imagine the confidence it takes to write about games,” my friend said at the bar where I was quietly swilling a beer I couldn’t afford but desperately needed. “Like, who are you?”

Who am I? Reading the general vibe of my editor — the only person available on this side of the country to write up this preview of Dishonored 2 — I am the single, last option and the only thing better than not running an article at all.

As much as I admire women in gaming, I am not one. It’s just not for me. Video games seem fun, but my cousin used to wear adult diapers so he wouldn’t need to ever stop playing them, and he’s in jail now. I have beaten Spyro 2: Ripto’s Rage a total of four times in the past fifteen years, and I’ve watched all of The Jinx without taking a bathroom break, and that’s it.

Look, I’m not perfect. In a college journalism class, I forgot to go to the Toots and the Maytals concert I was supposed to review and just made one up, using the descriptor “groovy” no less than twenty times. However, I did play Dishonored 2. I ate the free cheese they left out and everything, though the experience was wasted on me. Not the cheese, though.

The event, held at the Edison in Los Angeles, was the perfect venue for Dishonored 2 — or so I overheard someone whose natural volume was “shout” say. It’s a steampunk-themed bar, the kind that is simultaneously impressive and makes you want to steal the grown man with the pocket watch and transatlantic accent’s lunch money. Steampunk is the aesthetic of loud brother-in-laws who talk with their mouths full but are okay fathers to your nephew so you grudgingly buy them a gift card to Dunkin’ Donuts every Christmas. The gaming press is clearly amped to be attending and chat excitedly among themselves as I compulsively consume cheese.

Finally, another writer approaches me. At last, a friend! A brother in the shared love of words!

“Are you one of the steampunk actresses?” he asks. Was he having a stroke? Was there any sentence in which the words “steampunk” and “actress” could belong next to each other? The mind boggles.

“I don’t know,” I say, responding more to how I feel about the world in general than his question. I do know. I’m not a steampunk actress. I’m a radiant woman writer. “I’ll go ask someone.” But I don’t ask someone. I hide behind a pole that is just a pillar of gears and I eat more cheese and I sweat. The only thing steampunk fans love more than hideous vests are extraneous gears.

Before I tell you about my experience with Dishonored 2, let me tell you what you came for. Here’s what people who know what they’re talking about said of the game:

“Dishonored 2 takes it a step further and delivers one of the most rewarding experiences I’ve had in gaming. This mission alone was filled with so many laughs, gasps, and moments of elation, simply because I was able to adapt to any situation and was always rewarded for exploring just a little further.” -Trusted Reviews

“Played a lot of Dishonored 2 today. Completionist on the first one drops in a few weeks. It’s super tight! #notanad #Dishonored2” -The Completionist

“Dishonored getting a proper sequel takes that further. It suggests that you can stop thinking about how they used to make them, and start getting excited about how they make them now.” -PC Gamer

Votes are in! The game is good. It’s a good game. The first choice writer for this piece would probably tell you a lot of reasons why it’s a good game, but he’s out of the state right now. What I can tell you is that I smashed a lot of glass cases with my sword and tried to open a locked door by throwing bottles at it for twenty minutes. So if you’re looking for a game where you can pick up a lot — and I mean a lot of bottles — and throw them at immobile objects, this is the perfect game for you.

The protagonist of Dishonored 2 has a name, and although I can now see that her name is Emily Kaldwin, I kept forgetting it during the playthrough and referred to her in my notes by the title of my high school Latin books, Ecce Romani! (This translates to “Look, the Romans!”) According to these same notes, Ecce Romani is a princess with the confidence and cheekbones to have a short haircut, but she also needs to kill bad guys and rescue a Russian wizard and/or scientist in order to save the kingdom, or the steampunk world, I’m not sure.

This information turned out to be all wrong. According to the game’s website, Dishonored 2 takes place fifteen years after the first Dishonored game and features Emily Kaldwin, who was wrongfully framed for her mother’s assassination in the first game, trying to regain her throne again after an “otherworldly usurper” takes it from her. I don’t know what that means, but I also learned that Vincent D’Onofrio voices a character. Also, I totally mixed up Vincent D’Onofrio and William H. Macy in my head.

A gamer with capabilities exceeding a sweaty alleged steampunk actress will eventually kill assassins in this game, as well as a series of “clockwork soldiers” littered throughout the mansion in the level provided to the press. In said level, you play as Emily Kaldwin and enter a place called the Clockwork Mansion in pursuit of an evil inventor named Kirin Jindosh. The whole building functions like a massive steampunk clock, controlled by levers and relying on the player’s stealth to discover the different pathways the game reveals. I’m told by a representative for the game that a lot of what makes Dishonored 2 special is that it’s extremely accommodating to player’s choice — you don’t necessarily have to kill Jindosh, but you can, and the remainder of the game will be different for you depending on what you choose.

The Mansion is packed the the gills with playable objects with no clear function except set dressing to sell the steampunk and sell it hard, resulting in a bevy of food I could eat, old timey photos I could stab, and books I could throw grenades at. The main point of this level is to solve the puzzle and explore all the nooks and crannies in the mansion until you find its owner, a feat that literally everyone in the room except me seemed to accomplish. You kill robot soldiers, you kill assassins, and you can kill Jindosh.

This information was gleaned from the guy sitting next to me, because I didn’t make it to the assassins. I almost killed a robot, but then it killed me first. I died a lot in this game. Almost as much as I threw bottles.

Here’s something the guy next to me wrote on his iPad. He seemed smart, but also wouldnt answer the question “should I just hit it?” I asked while pointing at a concrete wall on the screen, so he was also very rude.

“Dishonored 2 blends violence, fantasy, and a gorgeous nuanced gamescape into the experience as seamlessly as its predecessor did, and reads as a perfect sequel in ease of play, story, and character.”

Here is what I wrote: “What are all the gears for? This time is fictional for a reason. No government in their right mind would invest in this many gears.”

In the 90 minutes I played Dishonored 2, it appeared that I was supposed to solve a steampunk mansion puzzle, kill the villain who I think was Vincent D’Onofrio, and rescue the Russian scientist. I did not solve the puzzle, got yelled at by the villain through a pane of glass, died eighteen times, and threw every bottle, which did nothing. There was one point where I threw all my grenades at the floor and the iPad guy started laughing at me. He was killing assassins. Where were the assassins? Reader, I do not know where the assassins were. Maybe you’ll find them.

As I walk up the steampunk staircase to slink back to my car, another socially impossible rail-thin man in a Dishonored 2 t-shirt stops me.

“Excuse me, ma’am, are you one of the steampunk actresses?”

I almost have a rage blackout. Why can’t anyone stop me in the middle of a steampunk bar and ask me if I am a radiant woman writer? Hmm? That’s a trick question. I wouldn’t be caught dead in a steampunk bar for fun.

Anyway, Dishonored 2: A game that is good, and you will enjoy it. I can also say from experience that you should not throw all your grenades at the floor, and tossing bottles at a door is an ineffectual way of advancing.