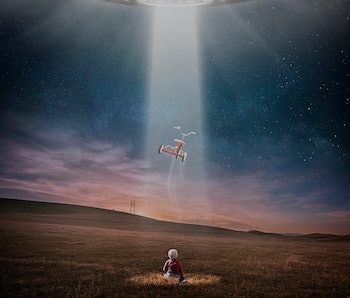 In 1961, Betty and Barney Hill accidentally launched the alien abduction support group movement. The couple was traveling through New Hampshire’s White Mountain range one evening when Barney spotted a low-flying disc-shaped object about 100 feet above ground. He left his wife in the car and used his binoculars to peek in, later describing looming, non-human figures cloaked in black. Then — for two inexplicable hours — everything went black. Betty Hill’s new blue dress was torn from the top of the zipper down to the hem and sprinkled with a mysterious pink powder. Barney Hill’s shoes were scraped, his binoculars rubbing his neck raw with friction. Both their wristwatches were frozen at the same time; the car was marked with shiny spots that made any compass placed on top go haywire. Betty and Barney Hill had been abducted by aliens.

Fast forward to 2016: Scientists are actively searching for signs of life in the deepest corners of our universe, entrepreneurs are planning space colonies, and People of Earth has debuted on TBS. The show is a comedy centered on a New York reporter crashing an ultra-secret alien abduction support group Nellie Bly-style. Naturally, in the course of his reporting, he realizes he might be an “experiencer” as well.

The Mutual UFO Network — or MUFON — has spearheaded the alien abduction support group movement in the United States for the past several decades, focusing on not only independently investigating reports of alien abduction but also offering support in the aftermath of an experience. Kathleen Marden is the director of experiencer research at MUFON and the niece of Barney and Betty Hill. She was 13 when they disappeared; the first person Betty called was Marden’s mother.

“It had a huge impact on me,” Marden said. Marden was a social worker and then worked in schools until about 26 years ago, when she decided she would work towards researching experiencers. Part of that drive was inspired by the negative experience the Hills faced after reporting what happened to them. “I was angry by the way they were treated,” she said. “I knew this was real. I saw the evidence. It has been investigated in scientific laboratories.”

Marden knows people think of alien abductees as kooks and lists out the Hills’ qualifications: Betty was a social worker for the state of New Hampshire, while Barney worked for the post office. Barney — who was black and married to the white Betty — was active in the civil rights movement and appointed to local civil rights commissions.

Marden is right that alien abduction has long been considered ridiculous, something to be scoffed at, perhaps indicative of bigger psychological problems. A lot of it is thanks to pop culture, like the viral SNL skit featuring Ryan Gosling deadpanning his experience being abducted by otherworldly beings. Marden also blames the media and officials that Marden refers to as “disinformants” who smear the reputation of those who claim to have experienced an alien abduction as potentially psychologically disturbed or to be mistrusted.

“These people are ridiculed in our society and are afraid to speak of their experiences,” Marden said. “They are not accepted in our society. A lot of information is written by skeptics to discredit and criticize individuals whose stories have gone public.”

But MUFON aims to clear this up with support groups not too different from those portrayed by People of Earth. They have a 30-part questionnaire on their site to evaluate your background and the intensity of the experience a person might report. Based on the report, an abductee might be referred to speak to someone on MUFON on a strictly confidential basis; if they’re especially shaken up, they might get handed off to a hypnotist or a psychotherapist.

MUFON, however, is protective and secretive of the exact way alien support groups work. Patients and those on the therapy side sign confidentiality agreements. Marden said workshops were held in unnamed locations to connect experiencers — “nothing leaves the room, no members of the media are allowed, no recording devices are let in.” In this way, the fact that a reporter has to masquerade as an experiencer in People of Earth is pretty realistic.

Expectedly, science isn’t sold on the burgeoning movement to accept the experiences of alien abductees. In 2008, Columbia University psychoanalyst David V. Forrest wrote a paper based off the Hill’s case and suggested the couple was dealing with accidental awareness, which is when a person is in a fuzzy state of consciousness while under anesthesia. As Scientific American reported in 2014:

While in a hypnotic trance, Barney Hill told his psychiatrist, “I don’t want to be operated on.” He described a spacecraft lit by blue fluorescent light, which didn’t cast any shadows, as in a surgical suite. The aliens had oddly shaped heads with large craniums, and indistinct lips and nostrils; they were all foreheads and eyes. Though he was terrified, he felt sluggish. He was struck by the all-business, professional bedside manner of the alien “doctors,” and impressed by their determination to do whatever it was they meant to do.

Some psychologists have suggested that alien abductees are potentially recovering memories in the deep recesses of their brains from a previous traumatic event. For Barney Hill, that might have been a childhood tonsillectomy. And in that respect, the Hills experience might actually be reflective of the continuing mystery of how exactly our brains store memories. There’s the idea that there is “everyday” memory — you remember what you ate for breakfast (if at all) this morning. There’s “routine” memory — the way to go to work, dialing phone numbers. Then there’s “trauma” memory, which is connected with PTSD. Anesthesia can induce these memories, as well as intense emotional states that invoke deja vu. They aren’t necessarily logical but can powerfully reproduce a sensation that was suppressed — pain, panic, general freaking out.

That aligns with the aftershocks reported by those who claim to have been abducted by aliens. People who claim to have had contact with aliens often display signs of PTSD, like bleeding ulcers and frighteningly vivid nightmares. While Marden both shot down the accidental awareness hypothesis and refrained from offering names of people who help treat those with alien encounters, she said many were psychotherapists who moonlight in paranormal experiences and are often trained in dealing with soldiers returning from war. “Some are qualified [to treat patients in psychotherapy and PTSD], some are not,” Marden admits. “We are not doing psychotherapy. We can make referrals, but we are non-judgmental listeners. We can assist them [alien abductees] to find the help they need, but we can’t call ourselves a support group because we are not licensed to offer mental health support.”

Regardless, Marden and MUFON are insistent that it is high time that alien abductees get credit for having the bravery for stepping forward with their stories and are offered not only the chance to recover but for their stories to be believed. “They’re faced with a huge change in personal reality,” she said. “It can cause a great deal of confusion, and it bothers them. Was it real? Was it not real?”

More like this
Science
8 hours ago
70 years ago, the world united for a monumental scientific project — and kicked off the Space Race
By Doris Elín Urrutia
Innovation
5.5.2022 7:45 PM
Study: Lunar soil has the right stuff for “extraterrestrial photosynthesis”
By Doris Elín Urrutia
Science
5.9.2022 8:30 PM
Crew-3 Splashdown: Watch SpaceX’s Crew Dragon Endurance splash into the Gulf of Mexico
By Jennifer Walter
Related Tags
Share: