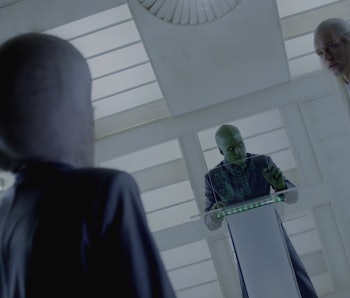 Getting abducted by aliens can be a pretty mixed bag. That’s why there’s StarCrossed, the fiction alien “experiencer” support group of the upcoming TBS comedy People of Earth.

Following journalist Ozzie Graham on what is initially an investigation into the group for a story, People of Earth focuses on Beacon, New York, an unusual hotbed of alien activity. It has the potential to be the kind of half-hour sci-fi comedy that we don’t often see on TV, provided it has some compelling characters and a concept that holds up for more than a few episodes or a season.

Half-hour sci-fi comedies aren’t among common television fare these days, but People of Earth just might change that. It’s inventive and enjoyable, and, if it works, could pave the way for more sci-fi leaning comedies like it.

The first episode of *People of Earth* is available on TBS.com until Oct 24, so here’s what we know about the show so far.

1. It shares DNA with The Office and Parks and Recreation but isn’t much like either

People of Earth comes from Executive Producer Greg Daniels, the mind behind The Office and Parks and Recreation. But don’t expect it to be too similar to either one. It’s has the tight, economical comedy that we’ve come to expect from Daniels projects, but People of Earth is a very different beast.

2. Wyatt Cenac is a journalist investigating a support group for alien abductees “experiencers”

Wyatt Cenac is Ozzie, who’s headed to Beacon following a car accident. He hit a deer, which isn’t that unusual, but he keeps having some pretty disturbing dreams about the accident. Though he initially writes off the group of people who prefer “experiencers” to “abductees,” he may discover that he has more than a little in common with them.

Off the bat, it’s clear that Beacon’s an odd place. Since 1962, Beacon’s had more than its fair share of alien activity. We still don’t know what the hell is going on in this strangle town, but something’s attributing to the unusual number of alien abductions, and it’s a good bet that the investigative journalist in Ozzie is going to get to the bottom of it.

Listen, any alien “experiencer” support group isn’t going to be full of a bunch of boring normies. Ozzie describes it as a “weirdo circus”, and while he may eventually come to regret that particular descriptor, there’s some truth to it. It’s not just Beacon that’s odd, it’s the people who live there, too. But that’s what gives this show some great potential. If you’re a fan of SNL’s Close Encounter sketch, People of Earth is for you. There’s a little less Kate McKinnon and little less “off the books” stuff, but there is a Ryan Gosling reference in the first episode.

5. Aliens Live Among Us

Aliens are all around us, even (and perhaps especially) in the Oval Office. One of the three types of aliens in People of Earth, the Reptilians, are shapeshifters. They’re hiding in plain sight, and a fair few of our past presidents were Reptilians in Commander-in-Chief’s clothing.

And yeah, Reagan was totally one of them.

8. There are three types of aliens

The Grays, the Reptilians, and the Whites. They all have distinctive characteristics, but they’re all in league to some extent. We know for sure that Reptilians are hiding out in our human ranks, but what they other two are up to when they’re not abducting humans is still an unknown.

6. There are some key phrases to listen for

People of Earth sets us up with a few clues to identify aliens nice and early in the game. First, the phrase “don’t get weird” is a big red flag — if you hear it, there’s a chance that things are about to get real weird, and whoever’s saying it is maybe probably an alien. But if it’s a deer in the passenger seat of your car saying it, things have already gotten pretty weird.

Another key phrase to keep an ear out for is, “You are special.” It’s what the aliens say to “experiencers” before they send them on their way post-whatever-it-is-they’re-doing-to-them. It sounds like a nice sentiment, but they say it to everyone, so it’s pretty much meaningless.

Where “don’t get weird” clues us into the fact that we might be seeing an alien, if we hear someone recalling the “you are special,” line, we know that they’ve had a similar experience to the ones described by the members of StarCrossed.

People of Earth premieres on TBS on October 31.