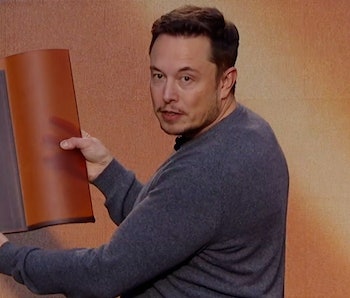 Hold onto your butts solar aficionados, the next generation solar roof is coming, and it looks good. During a brief event Friday night, Elon Musk presented his plan to integrate solar roofs with Powerwall power packs. But that’s not all. On Saturday Musk expanded on his talk by explaining via Twitter that the new solar tiles would come with some pretty sweet features — more specifically, built-in defrosters.

Unlike the solar systems of the past, Tesla’s newly designed roofs will feature aesthetically pleasing, energy efficient glass solar tiles, that will replace a home’s roof rather than sit on top of it.

Harsh weather conditions — like snow and ice — are known for wreaking havoc on traditional asphalt shingles, but that’s not the case with Musk’s new design. The solar glass tiles are not only more durable, but are also packing specialized heating elements that work much like the rear defroster does on your car.

Musk says that because the proposed tiles are made of glass, they can last almost indefinitely. The CEO estimates that they should come with at least a 50-year lifespan and will be at least 98 percent as efficient as their traditional, photovoltaic counterparts.

The posh new roofs will come in four varieties: Textured Glass Tile, Slate Glass Tile, Tuscan Glass Tile, and Smooth Glass Tile. Availability will start in California, but the company hasn’t revealed how much they will go for.

Tesla says they plan to start installing the solar roofs as early as next summer, but that’s assuming the proposed merger with SolarCity — worth an estimated $2.6 billion — is approved. With voting scheduled to take place on November 17, this announcement was as much a product launch as it was a justification for the merger itself.