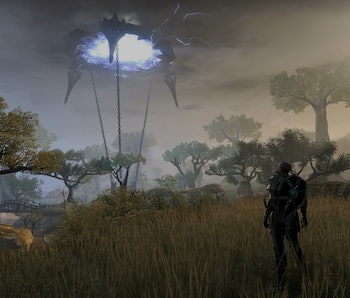 If video games were like the anime Sword Art Online, I’d be Kirito, because I prefer to quest alone. As a solo player, I was instantly drawn to Elder Scrolls Online. It’s an MMO that’s based in one of my favorite gaming worlds, Elder Scrolls, and it lets me explore realms and stories I’d only heard about in previous games. Plus, I loved the idea of an MMO you could play solo if you wanted. Notice how that’s past tense.

Bethesda recently rolled out its massive update to Elder Scrolls Online, called One Tamriel, and it has some cool features. You’re no longer limited to one faction at a time — you can now play as any race and travel to any of the game’s locations. For example, if you’re an Orc, you can now go hang out with the Khajit in Khenarthi’s Roost, one of the most beautiful locations in Tamriel. Before, each of your characters could only go to the three lands in your alliance, which could make things repetitive. This makes exploration more similar to other Elder Scroll games like The Elder Scrolls V: Skyrim, where you can be who you want, where you want, when you want.

However, it’s also completely changed the way the game is played. Instead of having different leveled quests and enemies, now they’re designed to match you. For example, if you’re Level 50, all of the basic enemies you fight will also be Level 50. Bethesda said this was so people of different levels could quest together, with enemies changing difficulty for each person on the team. That’s great for them, but solo players like me don’t gain anything from the change. If anything, I’m pretty sure I’m done playing this game because my Elder Scrolls Online experience just got a hell of a lot more boring.

Since every enemy is designed to match your difficulty, they all feel practically the same. Sure, they might have slightly different skills or fighting styles, but they take the same amount of time and effort to die. Every single time. I went from corner to corner, fighting scores of PvE enemies, and every single one of them felt the same. I could only play for so long before giving up and firing up my old copy of Skyrim, because at least it gave me villains with variety.

For me, the best part of leveling is getting to see where your character stacks up against the enemies you’re fighting. If you’re a Level 7 and you battle a giant bug, only to get your ass kicked, it’s so rewarding to come back as a Level 15 and smite it with a single blow. It feels like progress, even if I’m ultimately just spinning a digital wheel. Well, nowadays I have to buckle up every time I need to wander into the woods, because every fight is going to be just as tedious as the next.

These changes show Bethesda clearly values group players more than solo ones in Elder Scrolls Online. While that’s frustrating, it does make sense, business-wise. Group players invite their friends, spouses. and co-workers to join them — theoretically increasing Elder Scrolls Online’s numbers. From what I’ve seen, group players are responding to the change pretty positively, since they can now team up with friends and family who might be way lower levels than they are.

The whole experience has left me a little lackluster on MMOs for awhile. Luckily, Skyrim: Special Edition is coming out, so I’ll be able to still experience the Elder Scrolls world while having gameplay that actually gives me what I want out of it. One is truly the loneliest number in One Tamriel.