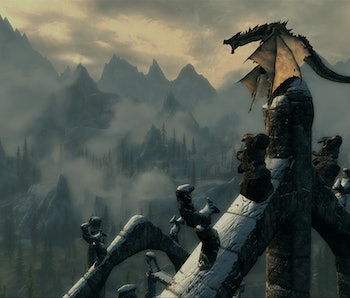 Although open-world games predate it, Grand Theft Auto III significantly changed the landscape of gaming with its brilliant sandbox world. The last generation of video games built on that legacy through exploring the likes of terracotta rooftops and gilded churches in Italy and the wasted, radiation-blasted remains of Washington, D.C.. At the same time, RPGs were in a period of transition. The popularity of Blizzard, BioWare, and Bethesda’s strong roleplaying portfolios cannot be denied, but they weren’t exactly comparable to the success of titles like Call of Duty or Gears of War.

That all changed with the arrival of Skyrim, whose success has had a lasting impact on the RPG genre.

Prior to Skyrim’s release, a shift in what an RPG actually was had begun. BioWare had been experimenting with dialogue and morality systems for quite some time, all the way from Baldur’s Gate to Mass Effect. Mass Effect itself was a branching point for the genre, with the arrival of Mass Effect 2’s fast-paced, third-person combat that played like a shooter in RPG clothing.

Meanwhile, Bethesda, which had been well-known for its Elder Scrolls series featuring expansive, fantasy worlds, was continuing to push the boundaries of scale in RPGs with Oblivion and Fallout 3. Rather than focusing on complex narratives and interpersonal relationships, Bethesda created worlds with histories that are worth exploring. That just so happened to mesh quite while with the rising fascination with open-world games.

Before Skyrim was released, Bethesda enticed people with promises of an endless landscape to explore, pointing out mountains looming in the distance that you could actually walk to and climb. And they made good on that promise, as you could wander to any point on the horizon and find something to do. Everyone that’s played surely remembers climbing to the Throat of the World for the first time. The jagged peak lured you in from miles away, the game drawing you ever closer until you reached the top with a sense of pure achievement, discovering an enclave of monks, the Greybeards, who taught you how to speak with the voice of dragons.

That sense of unlimited exploration lent itself to the game’s quest design, too. Yes, you can blame Skyrim for swamping adventurers with banal fetch quests. Yet, Skyrim’s approach to scripted events was revolutionary in a way, and many RPGs — like The Witcher III: Wild Hunt — have adopted it.

While Skyrim featured a map with points of interest typical of most open-world games, it mixed things up. Where one might normally get quests from a sign board or an NPC, now you could stumble upon an elaborate quest from simply picking up a dusty old tome, finding a love letter, or wandering into an unassuming cave. (Not that Skyrim necessarily invented these scenarios entirely on its own, just that it solidified them in a way not seen before.)

This emergent sort of storytelling made Skyrim feel like a living, breathing world despite its glitches, three voice actors, and less-than-inspired combat system. Dragon Age: Inquisition built on this, and CD Projekt Red’s Witcher III mastered it with its brilliantly written quests. Having learned a lesson from Skyrim, you can now ride your horse to a crumbling ruin in the Witcher III and stumble upon a quest in which a cave troll is taking donations from the unwitting peasants after convincing them that he is a god. If not directly inspired, the structure of Skyrim has at least permeated the Western concept of RPGs to its roots.

Developers continue to experiment with developments made by Bethesda, mixing them with some of the amazing character work, morality systems, and more that’s been devised by studios like BioWare and Obsidian. Its massive world of unique biomes, caves, tombs, and sunken ships full of mystery and danger, have ensured that Skyrim is basically the blueprint for the RPGs we play today, years later.