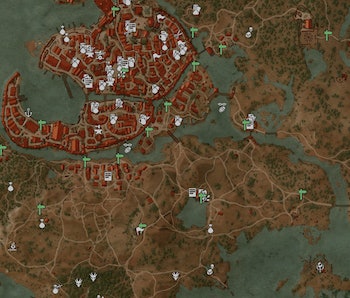 2015 was the year that open-world blockbuster games peaked. From Mad Max to Just Cause 3, it felt like every month or so there was a new game to see a giant map with collectibles in every corner to hunt down. Exhaustion in such a case would be understandable. And yet, despite the density of open-world games, 2015 also saw the best crop of these giant games perhaps ever. After years of watching middling collection-heavy games like the Assassin’s Creed series or initially-loved, later-exposed as superficial role-playing games like Dragon Age: Inquisition and Skyrim, 2015 is the year that open-world games finally came of age.

Yet there’s no simple, single explanation for what happened this year to make these giant games get better. The long-term scale of game development cycles means that the odds of developers saying “you know, Dragon Age: Inquisition actually suffered from being too big, let’s do it better” is miniscule. Instead, there’s simply a collection of long-running series — The Witcher, Assassin’s Creed, Fallout, and Metal Gear Solid — all making slightly different and better choices, and dramatically improving their games.

For Assassin’s Creed: Syndicate, the fixes were primarily technical. Making sure this game wasn’t as embarrassing as Unity was a decent start, but the interface also got two essential tweaks. First, the player characters were both given a grappling hook, that let them shoot ropes up and across long distances, making speedy traversal plausible. Meanwhile, the game’s interface also offered buttons for sneaking, as well as speedy parkour aiming up or down, both of which previous games in the series left up to the game itself to decide, with occasionally frustrating results.

The elimination of that confusion helped turn Syndicate into one of the smoothest Assassin’s Creed experiences yet. It’s not that the core idea of the series — a Prince of Persia set in an open, historical world — was ever bad. It’s more that the series was always just annoying enough that removing a handful of the most consistent annoyances helped shift the latest installment from yet-another-Assassin’s Creed into an actual pleasure, even for non-fans.

For The Witcher 3, which has deservedly become the de facto choice for most “Game of the Year” awards, the great leap forward is, quite simply, a massive amount of effort. It was always possible for open-world games to attach multiple little stories, and to integrate those stories in into the scattered caves and dense cities that make up the maps without it turning into a bug-filled mess.

And yet The Witcher 3 managed to do all of that, integrating its story, geography, and gameplay at an unprecedented level for a role-playing game. How difficult after Witcher 3 will it be to go back to Skyrim and its almost-total lack of story of characterization, or Inquisition and its rigid separation of plot missions from open-world? Its developers put so much effort into making the open-world work that it feels almost effortlessly interconnected.

For Fallout 4, a bevy of small tweaks and improvements helped, especially a role-playing system that encourages exploration and development. But the key element for it to stand out was the crafting and community section. Almost all games, and especially open-world games, are about a conceptual colonization. The player is dropped into a strange world, and slowly maps it out and understands it until they can take “ownership” over it.

Fallout 4 reinforces this model by actually allowing players to build communities, to create safe places for the inhabitants of the Wasteland to live their lives. You don’t simply colonize the Commonwealth by checking every point on its map, and doing every quest. You literally create communities, leaving safety behind you — and the post-apocalyptic vibe helps remove most of the historical issues with colonization. There is a satisfaction and sense of progress to Fallout 4 that meshes perfectly with its world. Thematic resonance is built directly into the game itself.

For Metal Gear Solid V, the change isn’t an improvement to an open-world model, but a shift to a fully-open world. The Metal Gear games have always been about a collection of moving parts, a set of guard patrols, hiding spaces, and unintended consequences. Last year’s Ground Zeroes, a sort of prequel to MGSV, was nothing but this: a two-hour infiltration of a military base. The systems were all in place — guard patrols, alarms, trucks, spotlights, but the combinations were surprisingly deep.

What the full game does is take those systems and apply them to a huge map, filled with connected outposts and bases and villages of varying size. Some have missions, some have information and items, and some just must be traversed. But every single one can turn into a crisis. And it’s at its best when players try to move in on a defended position, feinting and prodding for weaknesses, than running, hiding, and improvising if anything goes wrong. In that respect, one of the most forward-looking open-world games calls back to one of the classics, the never-replicated genius of 2008’s Far Cry 2. Attaching that to Metal Gear Solid’s always-strong systemic gameplay was a real winner.

It’ll be a big question moving forward whether 2015 represents the zenith of open-world games or a stepping stone to bigger and better. But that’s long-term. Right now, we can probably say with confidence that this has been one of the best and most varied years for massive maps, action, and adventure.