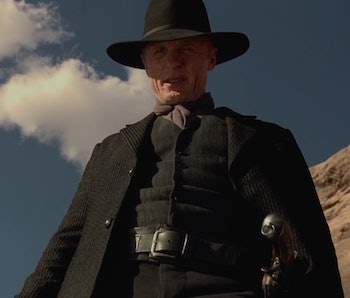 If we read between the lines, it looks like Westworld’s Man in Black is a global hero who probably revolutionized medicine and was therefore granted an all-access pass to the park. But the thing is: Nobody gets sick in the future thanks to him.

In Westworld’s pilot episode, Dr. Ford implies that basic illnesses are a thing of the past. For regular humans, healing from injury or illness is as simple as a spinning dunk in regenerative milk. Dr. Ford says:

“We’ve managed to slip evolution’s leash now, haven’t we? We can cure any disease, keep even the weakest of us alive, and one fine day perhaps we shall even resurrect the dead, call forth Lazarus from his cave. Do you know what that means? That means we are done, that this is as good as were going to get.”

He says “keep even the weakest of us alive” as if it’s become commonplace in the world outside of Westworld for people to live really long, really healthy lives. Even the tragic death of Bernard’s son probably wasn’t due to an illness. In Episode 3 — particularly in his conversation with Dolores — it’s heavily implied that his son, Charlie, drowned. Had it been some sort of illness, maybe he too could have also been saved by the MiB.

Evolution is “done.” Medicine’s advancement is complete. Humanity has reached peak health, and perhaps it’s that immortal-esque sense of boredom that drives so many to simulated murder in a live-in Wild West-themed park.

In the episode “Dissonance Theory,” a random park guest walks right up to the Man in Black and tells him that the MiB’s “foundation literally saved [his] sister’s life.” If it’s possible that even the “weakest” are kept alive, then this checks. A huge breakthrough has occurred in the real world outside of Westworld, and the MiB is like the Steve Jobs of saving people’s lives.

In this scene, that guest’s buddy urges his friend to say hello: “Just talk to him” … as if they are starstruck. What the guest does say to the MiB is, “Excuse me, sir. I just wanted to say I’m such an admirer of yours.”

So, maybe in his real life, the Man in Black created some sort of foundation that must have resulted in medical advances or cures for diseases. It can’t be that he cured just one disease or saved just one girl. He’s got to be some kind of ultra-celeb IRL that damn near created immortality. Is it possible that he discovered the the fountain of youth in pill form, and that’s why they grant him the ultra VIP status within the park?

If the Man in Black did indeed pay top dollar to stay in the park each year over the course of 30 years, then that money came from somewhere, perhaps from the pharmaceutical profits that would come from creating an immortality wonder drug or even something like the cure for cancer.

Probing DiscoverWestworld.com’s chatbot Aeden will let you know that the Man in Black is something of a VIP.” In Episode 2 of Westworld, Head of Security Ashley Stubbs (Luke Hemsworth) also says of the Man in Black, “That man gets whatever he wants,” which, you know, totally includes magical exploding cigars.

Whether or not he is a celebrity philanthropist IRL, the Man in Black is certainly something of an expert-level gamer hellbent on some insane thrill ride. When approached by his “fan,” his response is just as ruthless as everything he’s done so far in the park: “One more word and I’ll cut your throat. Do you understand? This is my fucking vacation.” So leave him alone. Let him do his thing. And remember this theory when the Man in Black and Dr. Ford have an in-person conversation in next week’s episode.