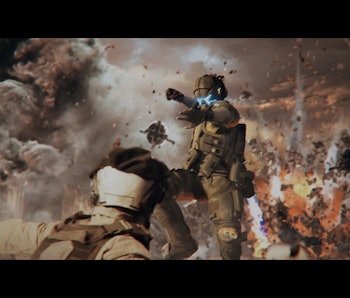 The next installment of Respawn Entertainment’s Titanfall releases this week, bringing a whole new set of features to the series including an entire campaign and completely fleshed out customization in multiplayer. These aspects, along with many others, have been altered to expand on the base experience in Titanfall 2 and provide players with a more complete package on day one. Here’s a few things you should know about your first few hours.

Why yes, Titanfall 2 does have a single-player campaign this time around — and it’s not half bad actually. While the first Titanfall didn’t have one preset, it did have an interesting series of backstories that took place in a bigger universe. Unfortunately, we never saw the universe Respawn created for Titanfall in any real capacity. Thankfully, Titanfall 2 remedies that completely.

The story behind Titanfall 2 is focused on the conflict between the Militia and IMC across the Frontier, a sector made up of the deepest reaches of explored space. Here you take on the role of Jack Cooper, a rifleman in the Militia who joined to take a stand against the IMC following their offensive on his community — piloting a Vanguard Titan for the Militia’s offensive forces.

Titan Customization Has Been Scrapped for Presets

With Titanfall 2 Respawn wanted to give each Titan a set personality and purpose in multiplayer. So instead of allowing players to customize one of three base Titan chassis, they opted to create presets players could pick from. There are now six different presets: Ion, Scorch, Northstar, Ronin, Tone, and Legion.

Each of these Titan loadouts have a dedicated role on the battlefield that supports specific playstyles. Take my personal favorite for example, the Ronin. Armed with a shotgun, teleportation ability and gigantic sword — it specializes in hit-and-run attacks. This means it can navigate through areas very quickly, but at the expense of a lower durability than the others. Experiment and pick a preset that best suits you.

Scattered throughout Titanfall 2’s campaign are boss battles, which, as you’d expect, are centered around engagements between Jack Cooper, BT-7274, and the various baddies present in the game’s main narrative. These mercenaries and the people they work for aren’t very pleasant individuals, and boy does the game do a good job of showing that.

Each of the boss battles in Titanfall 2 comes complete with an introduction, a key enemy, and his or her heavily customized Titan. These different Titans follow some of the preset characteristics from multiplayer too, encouraging you to handle them with different loadouts or a very refined strategy on the harder difficulties. It’s honestly a nice change of pace to the typical “shoot-n-run” system which has established a place in most FPS titles.

Customization Has Been Overhauled

If you played the original Titanfall, you’re probably familiar with the small selection of customization options present in multiplayer. We were limited to a few different weapons with a couple of attachments for each, a few unlocks to earn during our time in multiplayer, and a limited set of visual options to make our pilots and titans stand out. There wasn’t much to progress towards in Titanfall’s multiplayer at launch, and that didn’t bode well for people looking to distinguish themselves from other players.

Respawn has since built a massive wardrobe of visual customization for you to unlock as you progress through multiplayer, including new executions, paint jobs, and even nose art for your Titan. You’ll unlock these by leveling up, completing certain milestones, and by earning advocate rewards from your network. There are pages upon pages to work towards too, which means you’ve got plenty of stuff to work towards.

More like this
Gaming
6.23.2022 4:00 PM
You need to play the best cyberpunk RPG trilogy on Xbox Game Pass ASAP
By Robin Bea
Entertainment
7.1.2022 9:00 AM
Will there be a Stranger Things Season 5? Everything we know about Netflix show's future
By Mónica Marie Zorrilla
Gaming
6.22.2022 3:00 PM
TMNT: Shredder's Revenge is the retro beat ‘em up of your dreams
By Robin Bea
Related Tags
Share: