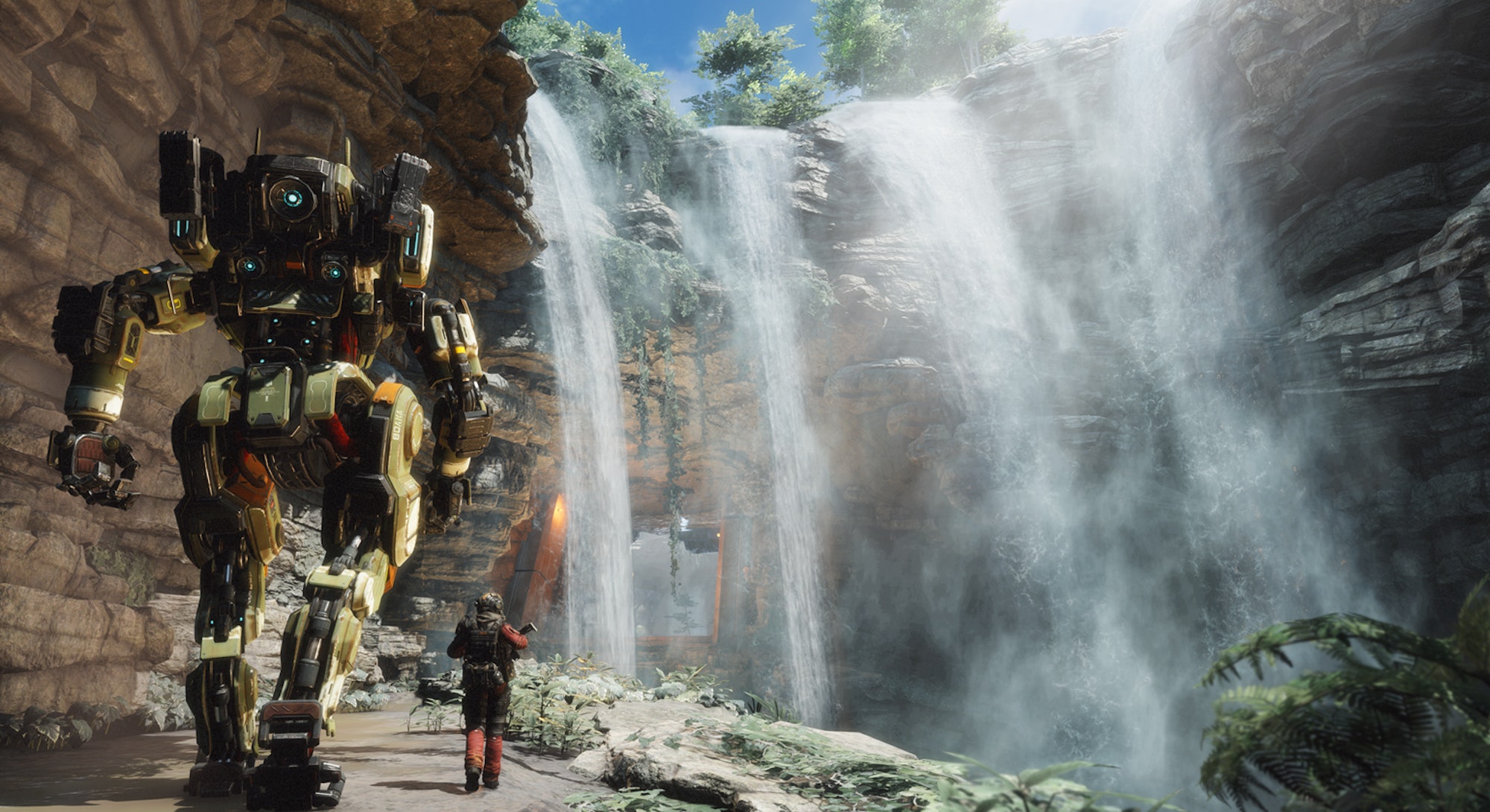 Hello, it is me, the court jester of video game journalism here to strut and fret my hour upon the stage once more. Upon being invited to see Titanfall 2, out later this month, I was not told that I was going to be put in a room with four high-powered Respawn Entertainment executives to play Titanfall 2 “alone.” They didn’t know that the equivalent of a skittish hamster being asked to perform heart surgery would be the person attending. Listen, we are all just doing our best.

Titanfall 2 is one of the most anticipated video games of the year, and I, the aforementioned figurative hamster, just so happened to be available to speak with key players in the project’s development. Fortunately, they’re generous and wonderful people, including Respawn Entertainment’s Chief Operating Officer Dusty Welch, Art Director Joel Emslie, Lead Designer Mackey McCandlish, and Community Manager Jay Frechette. They were pleasant, intelligent, and clearly had not been briefed on the fact that my gaming experience was limited to that one time I played Spyro the Dragon over the course of six months, fifteen years ago.

I’d done my research on the first Titanfall, released only two years ago, and was able to nod my head sufficiently through Emslie’s explanation of the story, essentially a highly intelligent, robot-laden dystopia with flavors of spaghetti western and science fiction that feels like a Michael Bay movie gone right. Titanfall 2 is equally impressive — revolving around protagonist Jack Cooper (manly!) and his trusty A.I. Titan BT. The game’s most progressive feature is, and I’ll let McCandlish say it the way I can’t, “a single-player shooter experience that’s less whack-a-mole and more explorative.”

After watching the new trailer, the team is so electric with excitement that they don’t seem to notice that I answered if I’d played the first Titanfall with, “Yeah, I loved, the, uh, it was good, man.” They describe the knots in their stomachs leading up to the October 28 release date, and Community Manager Frechette explains that the single-player setting was almost completely inspired by feedback from frantic fans of the first installment. Emslie’s enthusiasm revolves mostly around what he feels to be far more realized, fun characters — including human bosses inside of every enemy Titan, ranging from hulking Arnold-style Terminator villains to mustache-twirling, cat-stroking Bond homages sprinkled throughout the wall-surfing world. There are also choice characters being brought back for fans of the first, exclusively multiplayer game — like Titanfall protagonist Sarah Briggs, who Emslie pipes up to note is modeled on his sister-in-law.

The developers cite inspirations ranging from Kurosawa movies to Clint Eastwood’s cowboy joints, and the influences form a cohesive world to navigate as a single player. Teammates are already buzzing about additional levels they intend to add post-release, and I nod intently while sweating profusely. I keep thinking about this dream I have where I just take out a steak knife and cut off my left hand in tense social situations so they’re distracted enough by my random act of violence that I can run away, handless and undetected.

There they are — the words that have left me in an intense, involuntary Kegel since entering the conference room. There is a long pause.

I’m having a panic attack, so I wrap my scrawny legs around each other like a teenage girl with a crush or an adult woman who is having a panic attack in front of major video game executives. I mumble that I want to be placed in easy mode, and the room is visibly shaken. Still, we do it, and I perform middlingly until the time comes where I must press more than one button at once. What am I, a gifted pianist? This is not going to happen, and the team watches me fumble for a full minute, attempting to grind on one of the many surf-able walls in Titanfall 2 like a lonely eighth-grader at the semi-formal. These are real executives, I keep reminding myself. You’ve got to when you’re talking to powers that be in the video game industry, because they often all wear hoodies, and you could confuse them with your brother’s roommate.

“So my thing is, I don’t, I am the only writer available for this assignment, and I don’t know video games too much,” I say to some of the most influential video game developers of the decade. I can see all four of them register the series of white lies that have led us to this moment, but they’re too polite to point it out.

Without missing a beat, Emslie gets on board and hands the controller off to McCandlish to play through the Boomtown level — played as Jack Cooper in an effort to locate BT — for my dumb, dumb brain.

“We actually love watching people who don’t play a lot play this game,” he says as the marketing officer gives me a reassuring smile. “It helps us figure out how people who didn’t play the first game will approach the new one.”

While the single-player aspect is the biggest evolution in the Titanfall franchise, the team was careful to ward off comparisons to first-person shooters that some worked on in certain capacities in the past like Call of Duty. Instead of granting Cooper the godlike status of killing whoever the hell you want, what Welch calls the “thinking-person’s shooter” brings a distinct feeling of action-adventure style danger — even though there’s more weapons, you can still get your ass kicked. Players have the option to sneak around on the ground as Cooper or go big inside of BT, who is one of the most impressive feats of the game.

Listening to Emslie talk about the development of the BT character is like hearing a friendly Dr. Frankenstein gushing over his Creature.

“The robot is actually the biggest personality in this game,” he explains. “You develop a real relationship with him. BT is Optimus Prime but smarter, intuitively communicating with Jack and building a bond that led a room full of grown men into a sort of collective “aww.” He’s the result of nearly a year of testing voices, speech patterns and story lines, and it’s impressive to behold.

Of course, no one offers me the controller again, and they’re right to do that. I am a disgrace to everyone I have ever met, and I’m going to have night terrors and start researching grad schools again.

McCandlish plays through two other levels of stunning detail and, in the case of a later level, extreme peril. The majority of said level consists of Jack and BT freefalling from platforms moving thousands of feet above the ground in pursuit of one of the gruffer bosses in the game, and it turns my stomach a little to watch the intensity of it. Then again, this could also be my crippling sense of self-doubt, indicating weakness, fragility, and an urgent need to continue lying to this group of people about how much I like Game of Thrones, a show of which I have never seen and cyberbully those who do.

From what I’ve seen, Titanfall 2 is a well-crafted, highly customizable gaming experience, so much so that it’s apparent to even me, an actual moron. When BT sweeps out his massive, weighty robot sword and slices through another Titan’s robotic flesh, Emslie nods with satisfaction as the other execs give the sharp “Oh!” usually reserved for football screenings.

“Something about robots with swords is like, man,” Emslie says, shaking his head. “It’s so good.”