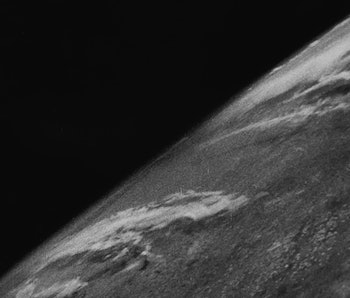 It’s grainy, black and white, and a little blurry, but it’s also the first photograph ever taken of the Earth. Seventy years ago, a rocket launched from New Mexico, and took photos with a 35mm film camera that would make history.

It wasn’t just any rocket that got that camera into space. It was a V-2 rocket, seized from the Nazis at the end of World War II. Three hundred train cars carried V-2 rockets to the White Sands Missile Range in New Mexico after the war, where the U.S. Army outfitted them with instruments, and launched them in order to learn more about the upper atmosphere, and to refine their own rocket designs.

The rocket that was launched on October 24, 1946, was carrying a 35mm movie camera that took photos at a rate of about 40 frames per minute. It traveled to a height of 65 miles above the Earth’s surface, just above the line that separates the upper atmosphere from space. The rocket came crashing back to Earth at about 340 mph, and the camera was destroyed. Fortunately, the film had been wound into a special steel container that survived. When that film was developed and projected on a screen at White Sands, “the scientists just went nuts,” said Fred Rulli, who was 19 at the time, and stationed at the New Mexico facility.

The photo may look a little underwhelming to us now, when we have crystal clear images of the Martian surface and distant nebulae, but just imagine if you had never seen anything other than a photo taken from a balloon, 35 miles up.

It would be another 26 years until Earth was photographed in its entirety by the Apollo 17 crew on their way to the Moon in 1972. Space photography has come a long way in 70 years, and so has the technology that gets those cameras into space.

More like this
Science
6.25.2022 4:00 PM
Voyager: 12 spectacular images from NASA's longest-lasting mission
By Jennifer Walter
Science
6.16.2022 10:00 AM
10 years ago, China docked to its space station — and changed the space race forever
By Doris Elín Urrutia
Innovation
6.15.2022 9:00 PM
Vulcan vs. Atlas V: What you need to know about the ULA's next mega-rocket
By Harry Stoltz
Related Tags
Share: