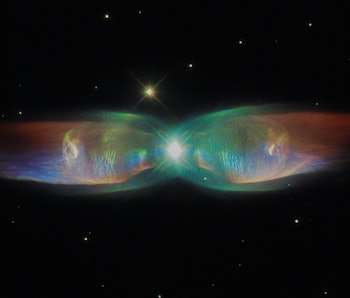 This year, 2015, was probably the best year on record for space images. We had the Curiosity rover on top of its game, continuing to snap up the wasteland of Mars, the Rosetta spacecraft taking up-close and personal portraits of comet 67P, and New Horizons give us the best images of Pluto ever taken.

Above is a picture of the Twin Jet Nebula the Hubble Space Telescope was able to capture. You can see its expanding layers of gas expanding as the remnants of a once-impressive star. Though it’s a star on its last leg, it still manages give off an incredible glow of light and color. It didn’t even make our list — we just needed something to illustrate that article. Seriously, this years pics were dope.

Here are the nine best space pictures of 2015:

Thor’s Helmet is indeed named after its resemblance to the mythological norse god’s headgear. In new images released in April, the ESA showed off its observation of x-ray emissions coming from the nebula, highlighted in blue.

New Horizons captured some amazing shots of Pluto this year, but perhaps none looked as epic as this one — a high-resolution frontal view of the dwarf planet, showing off the different color variations that emphasize just what an incredibly unique rock Pluto is.

Although Orbital ATK’s catastrophic launch of its Antares rocket happened last year, NASA finally released images of the explosion in 2015. The private spaceflight company would make up for it with a successful launch this December.

The Hubble Space Telescope just continues to churn out amazing things. Case in point: this new images of the Lagoon Nebula, showing the full force of the body’s intense winds from hot stars, and a swirl of gas and dark dust.

What you’re looking at is Circinus X-1, an x-ray binary star that tends to exhibit some erratic behavior. This composite of x-rays and optical images demonstrates the distance between the system’s neutron star and its more conventional stellar twin orbiting each other 30,700 light years away.

The world didn’t end with the September 27/28 ‘blood moon’, but it was still a sight to behold. A supermoon coinciding with a lunar eclipse doesn’t happen every night. When it does, we’re blessed (or cursed?) with a shiny red rock hovering ominously over all us mortal beings here on Earth.

3) The EmbraceIn a display of cosmic matrimony about 15,000 light-years away, we have the star Hen 2-427 coming together with the nebula M1-67, and the result is a fiery burst of gas and energy moving outwards into space at about 93,000 miles per hour.

Astronaut Kjell Lindgren finally returned back to Earth from the ISS this month, but not without snapping this amazing view of the Milky Way from space.

1) The DunescapeThe Curiosity rover snapped a hypnotizing photo of the Bagnold Dunes on Mars’ surface — an active geological region of the Martian landscape.