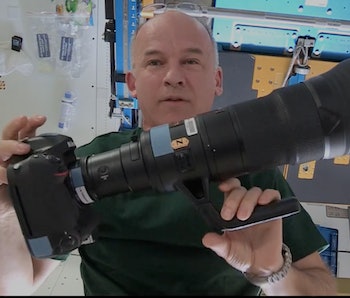 Jeff Williams tosses around $16,000 like it’s nothing. To be fair, 16 grand is pennies compared to the cost of his current home, the International Space Station, but the massive 800 millimeter camera lens he twirls around is astronomically expensive for most Earth-bound photographers. Williams is a photographer, like every other astronaut NASA has sent to space, but he’s taken a special affinity to it.

Capturing images of the Earth is a huge part of space exploration. There’s no better view of the planet than from the hodgepodge multinational research station orbiting 249 miles above the surface, and there are some shots that robots and satellites just can’t catch. For that, NASA trains all of its astronauts to be professional space photographers.

In the ‘60s the first astronauts immediately started taking photos from space, but according to the Washington Post, things really took off in 1972, when the crew of Apollo 17 snapped the iconic “Blue Marble” photo of the earth. Until that point, nobody had seen a photo of the entire planet we lived on, a full sphere entirely suspended in space (which probably still pisses off the flat earth theorists to this day). In July of last year, the White House recreated the Blue Marble shot but the original is still one of the most famous photos ever taken.

In the ‘80s, the astronauts started to get technical, using the latest Hasselblad cameras and undergoing classes on proper photographic techniques. Today, NASA gives them state of the art gear and makes sure they know how to use it. Check out this video of Williams going over his gear (which costs as much as some cars) and showing off his out-of-this-world view.

Williams’ Instagram feed is a gold mine of space photos, which are basically the ISS equivalent of snapping a picture out of a moving car window — except his ride is moving at eight kilometers per second, meaning he has to have some serious skill behind the lens to keep things steady when zoomed way in.

According to the Post, NASA employs specialized photography and videography trainers, who pick out the astronauts’ gear and teach them a wide range of photo and video skills, including live-streaming, 4K video, panoramic photography, digital photo stitching, and more. Scott Kelly, for example, used a RED 4K cinema camera to show off his skills at space ping-pong.

Don Pettit, another NASA astronaut, loved the photography aspect of the job as well. “Apart from everything else an astronaut does on orbit, photography is actually part of our job,” he said in a video by Smug Mug Films. “I’m Don Petit. I’m a photographer — and an astronaut.”

In the film, he briefly shows his setup for shooting atmospheric airglow images, which requires a specific camera setup and settings.

“My favorite subject is the earth at night, aurora is just amazingly beautiful,” Pettit said. “It’s just this glowing upper part of the atmosphere that crawls around like amoebas in the sky.”

All told, NASA’s astronaut-photographers have taken over 900,000 photos from space — and the last time it counted was in 2010. They’re all available though a special database, which you can view for free here. Photos from space both connect people to their planet and serve as scientific research, and as camera gear and astronaut skills keep getting better, we’re sure to have more incredible images to come.