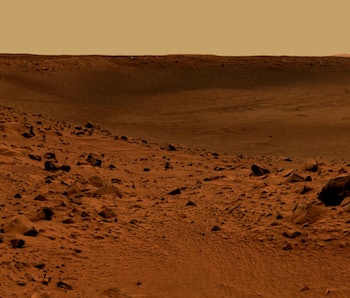 In a Reddit AMA Sunday, SpaceX CEO Elon Musk filled in some of the blanks in his plans to colonize Mars.

Musk predicts that Mars colonists will use “glass panes with carbon fiber frames to build geodesic domes on the surface” of the planet, and have to use “a lot of miner/tunneling droids” to create “huge amounts of pressurized space for industrial operations” and leave the glass buildings for green living space.

Early missions to Mars will focus on getting a propellant plant up and running in order to make the Interplanetary Transport System that will allow trips from Mars back to Earth much easier.

The Q&A session was meant as a follow-up to a presentation Musk gave to the International Astronautical Congress in Guadalajara, Mexico in September.

While the images of glass domes recall scenes of science fiction, the limited resources on Mars mean the domes could look more utilitarian than something you’d see in a theme park.

Here’s the full question from Ulysius:

Considering the synodal reuse of the ITS spaceships, what form of permanent habitation do you foresee? Shipped modules or an (eventual) shift to in-situ resource utilization such as Martian regolith/plastic-reinforced concrete structures?

Initially, glass panes with carbon fiber frames to build geodesic domes on the surface, plus a lot of miner/tunneling droids. With the latter, you can build out a huge amount of pressurized space for industrial operations and leave the glass domes for green living space.