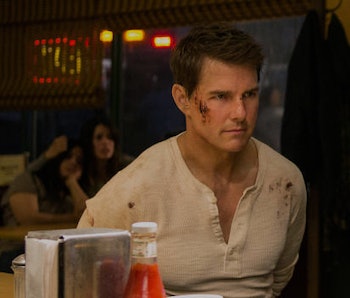 It’s tough to pinpoint the last time Tom Cruise showed off any true acting talent. His newest film, Jack Reacher: Never Go Back, hits theaters this week, and it’s not doing him much justice. The venerable former heartthrob seems to have fallen into two very comfortable types of roles lately. One lives in action vehicles, where Cruise ostensibly plays the same hard-edged secret agent type who constantly shifts from fast car to motorcycle to automatic weapon all in order to stop the bad guy from destroying the world (see: any Mission: Impossible movie, Oblivion, or Edge of Tomorrow).

The other is the curious curveball, where Cruise’s mere presence in something he wouldn’t otherwise bother with is enough to get people interested (See: Tropic Thunder or Rock of Ages). There are hints of Cruise’s unique flair in Never Go Back, but he’s become far too reliant on career security than experimentation.

The better-than-it-needed-to-be 2012 Reacher film tried to throw a wrench in the unshakeable Cruise-persona by making the character seemingly unlikable. It was a modern spin on Clint Eastwood’s Man with No Name or Toshiro Mifune’s wandering ronin from Yojimbo. He’s the kind of solitary loner from a bygone era who seems to drift into disputes and resolve them with brute force before moving on to the next.

It was a nice reprieve from Cruise flashing his pearly-whites and saving the day unscathed from countless numbers of aliens, super-spies, or more aliens because he scowled about it as a legit antihero. The tactile and grounded action scenes were also enough of an antidote for Cruise predictably trying to one-up himself in the Mission: Impossible movies by flinging himself off of increasingly higher buildings or clinging to bigger airplanes (even though, to be honest, those stunts are ridiculously awesome).

The sequel futzes with that non-Cruise dynamic even further by leaving Reacher with a surrogate nuclear family when he’s suddenly forced to go on the lam with an allegedly disgraced Army Major Susan Turner (Cobie Smulders) and a young girl (Danika Yarosh) who may or may not be his daughter.

When he isn’t engaged in hand-to-hand combat and gets some subtle fish-out-of-water moments struggling with these relationships, Cruise surprisingly does some of his career-best acting. The hard-assed introvert Reacher is forced to suddenly become a father figure he never wanted to be. He fails completely, and that struggle is a wonderful example of Cruise’s subtle genius whenever he allows himself to be vulnerable instead of a superhero. It’s jarring mostly because we’ve come to expect the action vehicle Cruise in these types of situations.

But Cruise is able to coax emotions out of himself perhaps unlike any other when he’s plays these kinds of fractured but steadfast men fighting their inner turmoil while having to prove themselves in an outward manner. As the self-help guru Frank T.J. Mackey, who covers up his daddy issues by peddling cheap chauvinistic pick-up artist tactics in Paul Thomas Anderson’s Magnolia, Cruise delivered a masterclass in personal tension. The same goes for his performance as paraplegic Vietnam vet Ron Kovic in Oliver Stones Born on the Fourth of July where he anchors the movie’s anti-war bent with simple strength. It’s no surprise that these two movies garnered Cruise’s only Oscar nominations.

He creates a lasting impression in Magnolia while largely staying put in two rooms. Fourth of July’s Kovic is confined to a wheelchair. Both of these other career highlights show what he can do when he isn’t hampered by the need to be surrounded by CGI explosions or endless scenes of him leaping off rooftops onto bad guys, and there are a lot of scenes of Cruise leaping off rooftops onto bad guys in Never Go Back.

At the ripe age of 54, Cruise’s time is nearly up as an invincible action star. The suspension of disbelief about a quinquagenarian transient with a flawless physique who is able to take on packs of professional thugs and assassins is about to run out. We accept it now simply because that is usually the premise of the Tom Cruise movie we happen to be watching, which in turn will make him still try to be able to take on five bad guys at once or jump out of airplanes in cool action scenes. But it’s got to stop sometime.

Never Go Back proves that Cruise is still capable of exceptional acting moments, all he has to do is give up the rest of his rote habits to help viewers remember.