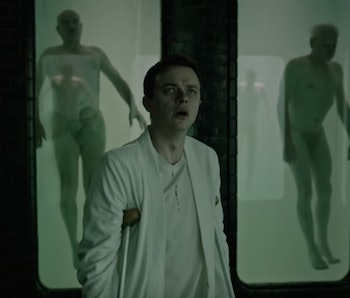 Wellness comes off a whole lot like deranged psychosis in the upcoming Gore Verbinski film A Cure for Wellness. The film’s trailer follows a young executive sent to retrieve his company’s CEO from a “wellness center” in the Swiss Alps. He “soon suspects that the spa’s miraculous treatments are not what they seem” — a massive understatement when you consider the trailer’s flashing images of sensory deprivation tanks full of eels, candle vigils, and a crossword containing the words, “CURE,” “BODIES,” and “FIRE.” When an eerie version of “I Wanna Be Sedated” kicks in, you know the sedation happening here is literal.

This could all harken back to a 1950s era movement that argued wellness was all about not getting sick. Bear with us here: In 1959, Halbert Dunn, then chief of the National Office of Vital Statistics, wrote a paper arguing that being healthy didn’t mean just not being sick. To Dunn, a body was only well if it existed in physical, mental, and spiritual harmony.

“Although psychiatrists have done much to relieve the twisted minds of the mentally ill, little has been undertaken to help ordinary people, classified as ‘well,’ to know themselves, and thus become better balanced and able to meet their daily problems more adequately,” Dunn wrote. “It will not be easy to help some adults achieve a better understanding of self.”

That history seems to ring true here, with how “the cure” and “wellness” are used in this difficult-to-timestamp Verbinski world: The doctors and nurses dress in early 20th century garb, there’s a shining high-speed train, and a car that looks suspiciously like a 1970’s Ford Pinto.

It’s also possible that in this Verbinski-universe, the “wellness center” may mix the wellness movement that began in the late 1950s, with the 1900’s psychiatry technique of “moral therapy.” In gilded age asylums of the early 19th century, psychiatry reform meant “restoring patients to sanity” via programs of control, and enforcements of rewards and punishments. While it was better than being treated like animals, it was a leg up in a messed-up system that still involved treatment involving electrical stimulation and hydrotherapy. Docility to what was demanded was the goal, and that’s echoed in the A Cure for Wellness plea that “letting go of everything you know and love” is all part of the cure.

But the fact that the film’s settings, like a freaky Grand Budapest hotel, is described as a “wellness center,” implies that this is a place that may use the techniques of an asylum in a freakishly dark and twisted way.