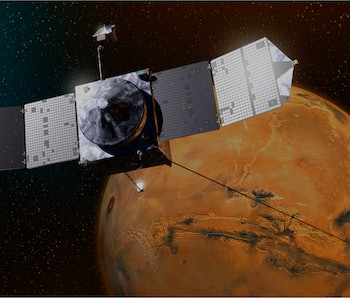 After studying the upper atmosphere of Mars for nearly a year, NASA’s MAVEN mission (short for Mars Atmosphere and Volatile Evolution) has learned a whole lot more about why the Red Planet is bleeding water molecules out of its atmosphere. In particular, MAVEN has been taking a look at the highs and lows of water concentrations on the planet over the course of the Martian year.

Although pockets of Mars do possess liquid surface water that comes and goes seasonally, the vast majority of the planet is a barren wasteland. This is because the planet has no robust atmosphere to ensure these reservoirs don’t immediately evaporate or freeze up.

One of the primary goals behind the MAVEN orbiter is to better characterize the atmosphere’s role in facilitating and propagating the loss of Martian water. Results from the nearly two year-long study (the length of a year on Mars) illustrates that the water escape rate peaked when Mars made its closest orbit to the sun, and was at its lowest when the planet was farthest from the sun. Loss at the maximum was 10 times higher than at the minimum.

Fluctuations of water loss were also observed over the course of the Martian year — although the leak steadily rose and declined as Mars moved closer and further from the sun, there were punctuated bursts in water loss observed.

To be clear, MAVEN didn’t see any actual water loss. Instead, it measured the fluctuations of hydrogen escaping out of the atmosphere — a proxy method of determining water loss, since hydrogen is a constituent atom that bonds with oxygen to create a water molecule.

“MAVEN is giving us unprecedented detail about hydrogen escape from the upper atmosphere of Mars, and this is crucial for helping us figure out the total amount of water lost over billions of years,” said Ali Rahmati, a MAVEN team member at the University of California at Berkeley, in a press release.

The results are important in characterizing the history of water and atmospheric chemistry on the Red Planet, but they will also play a role in helping future humans figure out to what extent they can use atmospheric water as part of the day-to-day processes that will make a colony on Mars operational. Right now, you have some people like SpaceX CEO Elon Musk under the impression that we could water plants by pulling water out of the Martian air. That notion is fraught with misunderstandings, to say the least, but knowing how water loss changes over the course of the Martian year could better illustrate to what degree this is (un)achievable. The researchers also observed that as Mars gets closer to the sun, the atmosphere becomes turbulent enough to encourage more dust storms, which could increase water loss in even lower altitudes.

In the long term, the findings may also demonstrate how much work humans will need to do to potentially terraform Mars and make it more habitable for colonization. Ideas for how to do this range from nuking the shit out of the planet (hey there, Elon!) to seeding the planet with life that can thrive in such harsh conditions, and begin the process of making Mars more like Earth.

MAVEN will continue to study the Martian atmosphere and learn more about how water behaves on the Red Planet. Let’s hope NASA, SpaceX, and every other group looking to see humans live and work on Mars one day are paying close attention to the data.