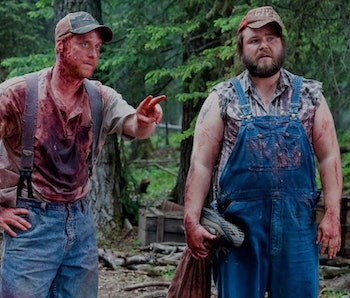 Although Halloween lurks just around the shadowy, cobweb-draped corner, horror movies aren’t for everyone. Maybe you don’t enjoy feeling scared or you simply aren’t into the dulcet tones of soundtracks that are heavy on the nails-on-a-chalkboard sound. Luckily, if this applies to you, there’s no need to feel left out of the festive Halloween spirit. The horror-comedy genre has never been more booming, between TV shows like Scream Queens and Ash vs Evil Dead. This Hallow’s Eve, if you’d rather stay away from parties, séances, Great Pumpkin vigils, and horror movies, there’s no reason why you can’t still celebrate. Here are the best movies currently streaming on Netflix that provide absurdity along with their gore and thrills.

1. Tucker and Dale vs. Evil

Too many horror movies repeat this tiresome formula: A group of hot, young coeds take a weekend retreat to a cabin in the woods, where evil shenanigans ensue. We all know the touchstones: On the way, they will obviously encounter a deranged gas station attendant in the nearest town, and they will be threatened by evil hillbilly townies. But Tucker & Dale vs. Evil is a wickedly clever classic that turns that concept on its head. Here, thanks to a series of honest misunderstandings, the “hillbilly townies” are the victims of the hot vacationing co-eds. Every trope you’re sick of is acknowledged in a devious, hilarious, and surprisingly warmhearted way. This one is a must-watch.

Though horror movie sequels are usually quite bad (see: I Still Know What You Did Last Summer or Wrong Turn 2: Dead End), the consistently self-aware Scream franchise uses this to its advantage. Just like 22 Jump Street did in comedy, Scream 2 provides its first film with a shockingly good follow-up that doesn’t make you regret the first.

Syfy original movies are an art form. There’s Frankenfish, which is exactly what it sounds like; Ice Spiders, which features protagonist who is an Olympic skier named Dash Dashiel; the classic Bruce Campbell film Alien Apocalypse; Shark Attack III: Megladon, which contains this gem of a scene; and Yeti, which contains a scene in which one character uses a severed arm as a splint. Then there is the Sharknado franchise, which is in a class all by itself. In essence, the Syfy network threw up its hands and said, “Let’s just give the people what they want. No need to dress up the name and packaging.”

This 2006 remake of a 1973 cult classic is technically a straight horror movie, but it stars Nicholas Cage. Enough said.

The title of this movie is fairly self-explanatory, but if you haven’t seen it, you probably don’t know that John Mayer is in it for absolutely no reason. Yes, the singer John Mayer, raspy-voiced purveyor of the Alternative Bro musical subgenre who almost certainly smells like he fell into a vat of Axe body spray, is in a movie called Zombeavers. It’s excellently random. Pay close attention to the very first scene.

A mixture of Diablo Cody’s underrated Jennifer’s Body and Sam Raimi’s Drag Me To Hell, this film gives the “demon possession” subgenre a fresh take with deadpan wit.

This film festival favorite from New Zealand is surprisingly cute, which is surely an odd choice of words for a film called Deathgasm. Quirky and self-aware; gory and absurd, it pokes fun both at heavy-metal culture and anti-metal backlash that assumes all metal-heads seek to summon demons with their music. Yeah, about that…