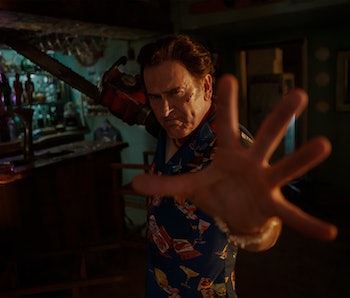 Bruce Campbell is a unique kind of movie star. He’s most famous for playing a single, unique character: Ash from the Evil Dead franchise, and he’s portrayed him for over thirty years. His roles frequently poke fun at the persona the world thinks he maintains, and like countless celebrities, Campbell has written autobiographical books about his experience with cult fame. He’s amassed a huge following of gorehounds, inspired at least partially by his distinctive, self-aware swagger. That’s why he stands alone as the Leading Man of Horror-Comedy. In short, there’s just no one else in the world like Bruce Campbell.

Campbell got on the phone with Inverse to discuss playing Ash through the years, what’s changed behind the scenes, chainsaws, his personal favorite genre, and more.

I’m a huge fan of the Evil Dead series, but also of the classic film Alien Apocalypse. If you were actually in a scenario with an alien apocalypse or with Deadites, what would you do to survive?

You’re funny. I’d run and hide. I have no elaborate scenario for you. I would do the quickest, easiest thing to survive.

Let’s talk horror props. Do you use the original Evil Dead chainsaw in the show?

No, we have a bunch of different kinds that they use for stunt purposes. We have rubber ones, we have carbon fiber ones, but the original chainsaw was an actual chainsaw.

Oh wow. Was that hard for you to maneuver?

Yeah, chainsaws are very heavy. They’ve gotten better though. My favorite is the carbon fiber because it’s much lighter. I use it as often as I can, but you have to use the right chainsaw for the right scene.

We have about three different kinds: If you’re doing a fight scene, you use a rubber one, and if it has to be an actual working chainsaw, you get the one that has the actual functioning mechanism of an electric chainsaw.

Season 2 of Ash vs Evil Dead dives into Ash’s past for the first time in the franchise. In your years of playing him, had you ever conceptualized your own back story for him?

No, I’m not that kind of actor. This season, Ash is going to go home. We’re going to meet his father, meet his old girlfriend, old buddies; we’re going to get to see a different part of Ash, and I think it’s great. That’s the best part of TV: the opportunity to develop more of a character, and because Starz is a very good partner, we don’t have any content restrictions.

And since you’ve been playing Ash for 37 years, there’s been a lot of progression with technology, like the lightweight chainsaws you mentioned. What’s the area where the changes have impacted you the most?

Post-production. Digital editing has made things a lot better, digital sound has made things a lot easier to do than manually cutting actual pieces of film and taping them together. I think digital cameras are good too. You can film more, you don’t have to reload all the time. People argue about what digital looks like, and if it’s done well you can’t tell. It’s removed a lot of drudgery.

What about the fake blood aspect? Has that changed much in terms of your experiences with it now on Ash vs Evil Dead versus in the first Evil Dead movies?

They have a pressurized beer keg that they’ve converted to a blood keg. Pressurized tubes going in one end and it shoots it out the other. Very complicated. It’s a very terrifying device. [In the movies], we had a whole different system: you blow shit through a green garden hose. We’re much more sophisticated now.

But it’s roughly the same repellent mixture that it always was. It has, you know, food dye in it and things like that, so it’s doesn’t taste good or smell good. It’s a strange unpleasant substance. I don’t enjoy any blood in my face regardless of how it’s delivered. It’s not an enjoyable process, but it’s effective.

Has your process with Sam Raimi evolved at all?

It hasn’t really changed. We trash talk each other a lot, but I respect him a lot and I do whatever he tells me.

Do you have a favorite of Ash catchphrases?

I don’t have a favorite because we’re spewing them out at an exponential rate now that we’re on television — so we’ll have to wait till Ash is done. They’re still being formulated.

Which one do fans quote to you the most?

I bet you get some weird fan encounters. Are there any that stand out?

Well it’s usually when fans try and associate me with horror. They think that, because I am in these weird horror movies, that I love horror. I got some poetry from some woman one time that was just hair-curling in its subject matter.

What is a genre you love, if not horror?

Obviously it would be silly to ask if you have a favorite project, but is there any one of your projects where you had the best experience making it?

I have a theory that something that’s easy to make is hard to watch. So usually when the filmmaking experience is actually not that pleasant, those turn out to be the better projects. The projects where you’re sitting around in your chair cracking jokes and talking with the other actors? You’re probably not working hard enough. I don’t necessarily need to have a good time when I work. I take work very seriously.

And just like Harrison Ford returned to both Indiana Jones and Han Solo, would you still want to be playing Ash in twenty years?

I’d be happy to. It’s the best character I’ve ever played.

More like this
Entertainment
6.21.2022 12:15 PM
Ethan Hawke is an instant iconic horror villain in The Black Phone
By Eric Francisco
Entertainment
6.19.2022 11:30 AM
You need to watch the best monster thriller of the '90s before it leaves HBO Max next week
By Mónica Marie Zorrilla
Culture
6.17.2022 11:31 AM
45 years ago, the worst Exorcist sequel almost killed the franchise forever
By Jon O'Brien
Related Tags
Share: