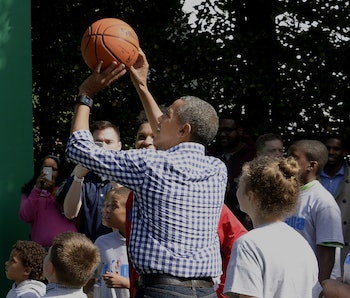 In a new Hillary Clinton campaign video encouraging Americans to vote early, President Barack Obama suggests that winning, in basketball as in elections, often comes down to good timing. “You know how you beat LeBron James one-on-one?” he asks, beaming with fatherly humor. “Get there 45 minutes early,” he says. “Then it’s one-on-none.”

As with all dad jokes, Obama’s painfully corny quip actually carries with it a kernel of wisdom, despite the insistence of one White House staffer in the video that “there is no such thing as ‘one-on-none’.” Showing up before your competitors, whether they be King James himself, or fellow Americans hogging all the convenient voting times, has been shown to incur a bunch of psychological benefits — plus time to practice, to boot.

For example, much has been said for the advantages early risers have over later risers. Because they often get to work before their distracting peers show up, they have more time to get through their to-do lists and mentally free up space for tackling more timely problems during the day. In 2010, the Harvard University biologist Christoph Randler, Ph.D., published research suggesting that early birds were more proactive and better able to anticipate problems than their late-waking peers.

In the hypothetical one-on-one game between Obama and LeBron James, would quality one-on-none time actually improve the President’s performance? It could be argued that, like early-rising employees, he might have more time to collect himself before balling with such a formidable foe. He would be wiser, however, to embrace a literal interpretation of “one-on-none” and actually compete against himself, mimicking the habits of the world’s best chess players.

Take, for instance, the example set by Luke Cage’s local chess guru, Bobby Fish (Ron Cephas Jones). In episode 12 of Marvel’s Netflix hit series, Fish is asked why he plays chess alone. Fish explains that it helps him see all of the possible moves.

He’s right. Researchers published a study on the benefit of practicing chess alone. Applied Cognitive Psychology in 2005 found that grandmasters spent an average of 5,000 hours playing alone during their first decade of learning the game, which is nearly five times the amount of time spent by intermediate chess players. They write that “deliberate practice plays a critical role in the acquisition of chess expertise” — a conclusion that a similar study in the British Journal of Psychology, published in 2008, came to as well. In other words, both studies suggest that “one-on-none” isn’t just real — but a game worth playing.

While Obama’s strategy of using one-on-none to win at basketball doesn’t make much sense, logically — you can’t lose, but you can’t exactly win, either — it’s impossible for the one-on-none strategy to fail voters.

More like this
Science
Jan. 28, 2023
How does the placebo effect take hold? A doctor explains two influential factors
By Kathryn T. Hall. and The Reader
Mind and Body
Jan. 21, 2023
Procrastination study suggests a link to shoulder pain, bad sleep, and more
By Eva Skillgate, Alexander Rozental, Fred Johansson and The Conversation
Science
Jan. 24, 2023
The Doomsday Clock is now at 90 seconds to midnight — here's what that means
By Kiona Smith
LEARN SOMETHING NEW EVERY DAY.
Related Tags
Share: