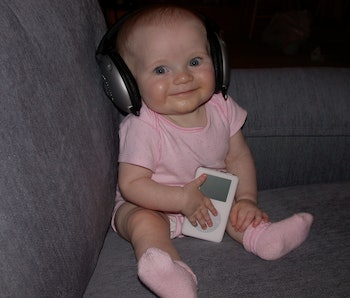 Grammy-winning songstress Imogen Heap of mmm whatcha say fame has made a tune both babies and adults can get down to. On Monday, Heap released “The Happy Song”, a song co-developed with psychologists. While it may all be for marketing (it was created for C&G Baby Club), the song is a scientific construction of what babies want in music — and in turn, is designed in a way that psychologically makes adults happy too.

C&G Baby Club, an online platform, surveyed English parents about what sounds their babies seemed to enjoy most. These, admittedly, are not the typical topics of an adult power ballad: flying sounds, sneezing, animal sounds, and baby laughter. But what’s important is that these are the things that are familiar to babies, and it’s familiarity that lies at the root of what we love most in music.

“What we know from the work we’ve done, is that babies absorb music from the world around them and understand how melodies and rhythms work very early on,” psychologist Lauren Stewart told Fast Company, “and that particular aspects of musical structure influence their emotional response — repetition is appreciated, as it allows them to predict what will come next, and that creates a particular positive emotion.”

While Stewart says that “surprisingly little research has been done on babies’ musical preferences and positive enjoyment,” we know that musical repetition and familiarity are also what makes adults jump and jive. Turn on the radio, and you’ll hear song after song use the “millennial whoop” and consistent line repetition (think: “Hotline Bling”). What makes an earworm an earworm is that consistent, repetitive, melodic phrases.

In other words: We don’t really grow out of our baby preferences for predictability.

Researchers have found that, among adults, repetitive song lyrics are processed more fluently, and are associated with increased likability. In a University of Southern California analysis of Billboard Hot 100 singles from 1958 to 2012, songs with lexical repetition were associated with a much greater chance of reaching number one.

The idea is that repetition plays into the idea of “mere-exposure effect;” we tend to like things if they’re familiar. In a 2011 study published in PLOS ONE, researchers explain that when people listen to music that is familiar (versus unfamiliar music), the brain’s reward circuitry ignites in the emotion-related limbic and paralimbic systems. Researchers concluded that “familiarity seems to be a crucial factor in making the listeners emotionally engaged with music.”

It makes sense that babies and adults would have similar cognitive desires when it comes to tunes — a love for music is deep in the brain and has solidified through millennia of social bonding. Cue up “The Happy Song” at your next party — your friends may hate you for it, but secretly think it’s catchy.

More like this
Science
Jan. 28, 2023
How does the placebo effect take hold? A doctor explains two influential factors
By Kathryn T. Hall. and The Reader
Mind and Body
Feb. 6, 2023
Overthinking? This New Kind of Therapy May Finally Provide An Antidote
By Elana Spivack
Science
18 hours ago
Ancient Neanderthal Leftovers Reveal How Skilled Our Distant Cousins Were
By Miriam Fauzia
LEARN SOMETHING NEW EVERY DAY.
Related Tags
Share: