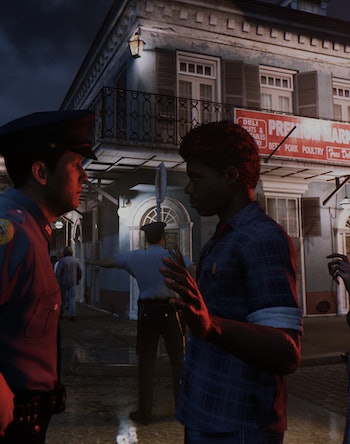 It’s not easy to portray American racism in video games; or at least, video games havent made it easy. The real-world discrimination of black people, Latinx, American Indians, and other groups in the United States is an important topic, both historically and currently, yet we’ve often shied away from giving it the attention it deserves. However, one game, while imperfect, has raised the bar for how American racism can and should be portrayed in video games: Mafia III.

Mafia III raised eyebrows when it announced that the game would be tackling racism. It made sense within the context of the game’s world, since it takes place in the wake of the Civil Rights movements in New Bordeaux, a substitute for New Orleans. However, there were concerns, not only about how racism would come into play in a series about the mob, but also about how the game developers, who were largely white, would approach the issue.

The result is … they did fairly well, at least from my perspective. It’s worth noting that this appraisal is coming from a white woman who’s never experienced discrimination based on the color of her skin, and I’m sure others will interpret the game differently.

Having played through the game, Mafia III approaches racism better than several other AAA games in recent memory simply because it’s implicit, rather than explicit. It’s about more than just showing us that racism exists, it dedicates time and effort to showcasing what makes racism a systemic concern. You play as Lincoln Clay, a black man who’s returned home after serving in Vietnam. He may be a hero, but he’s still treated the same as any other black person in New Bordeaux. By that, I mean he’s constantly discriminated against, but not in an always in an overt way. Instead, he’s poked with a figurative tiny needle over and over and over again.

The little details the developers put into Mafia III to seemingly showcase the systemic nature of racism are impressive. Police response time changes depending on how white your neighborhood is. If you shoot someone downtown, or even just look at an officer the wrong way, the police will track you down for what feels like forever. But if you’re out in the Hollow, it’ll all blow over pretty quickly.

It’s not just neighborhoods; it’s also the race of your victim. For example, when I stole a car in Pointe Verdun from a black person, the first responder suggested an officer go over there to “maybe take a statement” if they’re not too busy. However, just two blocks over, I stole a car from a white man and the police response was faster and encompassed a much larger area. I had to hide for two minutes straight before they called the search off. Normally, in the game’s black communities, it would take less than 45 seconds for the alert to go away.

That’s not all. White women clutch their purses when you walk near them. Black dock workers smoke by themselves at a distance from their white co-workers. Gangs of rednecks with Confederate Flags on their trucks call you “boy” while beating up random black men. Police officers will shoot you if you loiter near them long enough. There are segregated “whites only” businesses that will order you to leave the moment you arrive, and management will call the police if you don’t comply.

The police alert on your dashboard is one of the more impactful indicators. When you’re driving, there’s an alert bar that shows you how much police attention your driving is bound to attract. When I first started playing the game, I was so afraid of going into the “red zone” that I obeyed all the traffic laws, even pausing at every stop sign. It made me feel aware of my behavior in a way that I haven’t had to in other open world games, like Grand Theft Auto V, and a lot of it was based on the color of my character’s skin. It was subtle, but effective.

A lot of times, racism is portrayed in video games very explicitly, giving us the “worst of the worst” so we can easily determine what’s right and what’s wrong. In many cases they don’t even use real forms of racism, instead creating fictional representations that we can use to substitute actual discrimination we see in the real world. Games like Witcher 3 and Dragon Age II feature (largely white) mages and elves as the blighted classes, and let’s not forget the “Aug Lives Matter” disaster that was Deus Ex: Mankind Divided.

And when games show real racism, its often so in-your-face that you can’t help but feel disconnected. BioShock Infinite is a great example of turning real discrimination into a strawman. While the game has some successes, its gotten criticism for how it portrays racism. By making Columbia a segregated hellhole — with an entire police force dedicated to racial purity — it presents itself as so offensive that you can’t help but feel appalled.

Luckily, you’re playing as Booker and Elizabeth, two white characters who are seemingly above it all, making you to feel quite comfortably like you’re not part of the problem. In the end, the main black character, Daisy Fitzroy, becomes the very savage stereotype she’s fighting against, while Booker and Elizabeth emerge unscathed. There’s no subtlety at all.

That’s not to say Mafia III doesn’t have its moments of explicit racism. The first boss fight takes place in a closed-down park called Baron Saturdays Fun Park, which includes a Pirates of the Caribbean-style ride about a white priest saving a Black community from the evils of voodoo. One of the main missions includes taking out a Southern Union rally, the game’s substitute for the Ku Klux Klan. And there are a lot of uses of the N-word by white baddies to the point where it feels like a white supremacist stereotype. Once you recognize the time period in which this game takes place, it comes across as less a stereotype and more a mirroring of reality.

So why does this matter? Why is it important to show real American racism rather than just put it through a metaphorical lens? It matters because of the medium. Video games are positioned to give us more than entertainment. They’re capable of being a social tool, an educational device, and a fully immersive experience.

We’re already seeing social issues being tackled in the medium, but typically it’s smaller games like Gone Home or Telltale’s The Walking Dead. AAA games have yet to really step up in any meaningful way and use the mechanics at their disposal to make us empathize with other points of view. Race relations, specifically, are an important discussion point in 2016, and there should be more games that give us opportunities to explore where we were, where we are, and where we should be going.

The biggest concern, of course, is who tells those stories. As mentioned, Mafia III was created by a largely white team. While I do feel they were respectful and did their best, I’m sure there are details that they overlooked based on their own perspective — just as I’m sure there are details I’ve overlooked in praising how the game handles what can be a sensitive subject. The best thing game developers can do to approach American racism in the future is to hire more people who are directly impacted by it. Increasing the number of black employees would help game developers see where the conversation should go moving forward.

Mafia III isn’t a perfect game. It’s too long, there are more than a few bugs, and the missions get repetitive. It reminded me a lot of the first Assassin’s Creed, with every major section being basically a copy-paste of the previous one. However, the social conversation that the game brings to the table is perhaps its most valuable asset, and it’s one that other games should emulate.