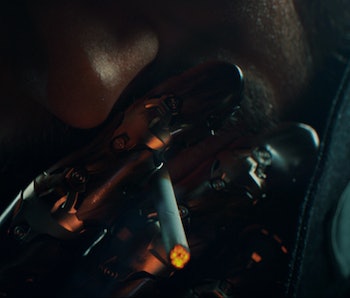 In the world of Deus Ex: Mankind Divided, augmentation is commonplace among humans across the globe — and not just for those who have lost functionality within certain parts of their body. These mechanical augmentations are an advancement on the prosthetic technology we have today, utilizing cybernetics to improve and entirely replace body parts with better, faster counterparts. They even connect directly with the central nervous system to provide the user with a direct link to his or her augmentations. But the question remains: Who would get one, and why?

Many of the augmentations present in Deus Ex give the user superhuman abilities. Eye augmentations allow users to take photos and directly upload them to social media with the blink of an eye, augmented arms allow athletes to throw balls further and faster, and humans can even go so far as to get a communications device implanted within them to eliminate the need for a cell phone.

These abilities aren’t without their limits however, with one of the main drawbacks being the cost for augmentations and the reliance on an anti-rejection drug called Neuropozyne provided you didn’t have a specific biochip implanted within you. So, with both the positive and negative in mind, Inverse writers Nicholas Bashore, Rollin Bishop, and Justin Andress sat down to discuss if they would augment themselves provided they had the opportunity.

Nicholas Bashore: The idea of human augmentation has always been something I’ve been extremely interested in from a medical perspective, namely because it helps humans who have lost some of their base functionality. The idea of being able to let a child walk again with fully functional augmented legs that he wouldn’t have to take on and off is something I would support 100% if given the chance, but if I didn’t need augmentations in order to restore my functionality? I don’t think I would do it, because I would have to rely on a drug controlled by the market.

That said, I’ve got pretty bad eyesight that keeps fading as the years go by — and I’m only 23. For now, I don’t mind wearing glasses in order to keep things in focus, but if it ever got bad enough that I was in danger of losing most of my eyesight, I would certainly consider getting a set of augmented eyes implanted. I’d definitely want that specialized biochip though so that I wouldn’t have to worry about Neuropozyne.

Rollin Bishop: Look, I’m going to be honest here: Even given the futuristic possibilities in the world of Deus Ex, I have no desire to replace well, anything. It’s kind of the same reason Ive never had any piercings or body modifications really of any kind. I think, were my eyesight as bad as Bashore’s — I do wear glasses, for what it’s worth — then maybe I’d consider it.

But anything more than that is just too far. I like the idea of having augs be a measure against terrible accidents, but any augmentations done that aren’t medically necessary just feels weird to me. Why do I need a robot arm? I’ve got a perfectly good human one. Now, if we’re talking about neural implants and the like in order to experience new forms of communication and the like — that’s a different story. Maybe that’s something I’d get behind.

Justin Andress: Gotta fall in the anti-aug camp. Even setting aside their prohibitive cost (which makes superpowers accessible only to the super rich) and the fact that they essentially turn you into an addict unless you’re willing to pay even more money, the entire idea of augmentations just has a scary eugenics vibe to it.

Sure, there would be anecdotal evidence to support augmentations. Who doesn’t want to see their little girl walk for the first time, right? But as a recreational pastime, there’s something unnatural about augs to me. I’ll stick with my meat prison, thanks.

More like this
Gaming
Jan. 30, 2023
Here’s Exactly How Long it Takes to Beat Hi-Fi Rush
By Hayes Madsen
Gaming
Jan. 17, 2023
Everything we know about Animal Well
By Hayes Madsen
Entertainment
14 hours ago
Dune 2 Will Be Hilarious, Says Actor Whose Character Killed His Own Dad
By Ryan Britt
LEARN SOMETHING NEW EVERY DAY.
Related Tags
Share: