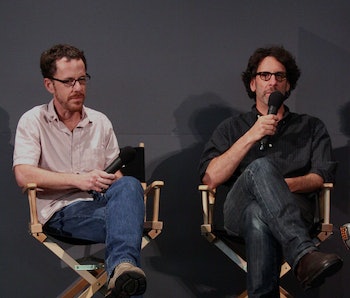 News hit Friday that filmmaking brothers Joel and Ethan Coen have been asked to rewrite the script for Dark Web, a movie that’s supposed to chronicle the rise and fall of the Silk Road, an online market that catered to drug dealers and their customers.

But the Coens won’t be alone in writing Dark Web: The script is based on a two-part Wired story that was published in 2015. The “dark web” refers to websites that aren’t indexed by search engines and require anonymity software like the Tor browser to visit. The Silk Road used the secrecy offered by the dark web to make it easier for people to trade in drugs, illegal software, and other illicit goods without having to worry about their activities being broadcast for anyone with a web browser to see.

Dark Web has been around in some form since 2013, when Silk Road founder Ross “Dread Pirate Roberts” Ulbricht was arrested, and was originally to be based on a story written for Epic. Now that the Coen Brothers have been brought onboard and the vivid Wired article selected as the new source, though, chances are good that this film might finally have a good chance of being made.

With that in mind, here are the three scenes from Wired’s original story that have to be in the Coen Brothers’ script to make Dark Web worth watching.

The government’s slowly building interest in the Silk Road.

Near the beginning of Wired’s tale is this scene, in which Drug Enforcement Administration special agent Mark Force IV was looking for an exciting case during an inter-agency meeting, which a postal inspector helpfully provided:

“Just wanna let everybody know about this,” the inspector said, delivering his brief to a conference room full of bored law enforcement personnel. “We are having problems with drugs coming through the mail.”

That is classic Coen brothers. The line is understated and brief yet detailed enough to set the scene for viewers. There’s also some dramatic irony, because Force later pled guilty to embezzling more than $700,000 in Bitcoin while investigating the Silk Road.

Under the Dread Pirate Roberts pseudonym used to run the Silk Road, Ulbricht is said to have once haggled with a member of the Hells Angels Motorcycle Club over the cost of a “clean hit” on a Silk Road user who went by FriendlyChemist.

Don’t want to be a pain here, but the price seems high. Not long ago, I had a clean hit done for $80k. Are the prices you quoted the best you can do?

I’m sorry, but we can’t do anything for that price. Best I can do is 150 and even that is pushing it.

This is the reality of running a digital black market: Haggling with someone representing the Hells Angels over the cost of killing someone. Many people were worried about using the Silk Road because they feared arrest; others were probably more concerned about becoming one of Ulbricht’s targets.

The strange banality of a SWAT raid.

Perhaps the end of Dark Web should portray the beginning of Wired’s tale. In describing the moment when things started to go south for Ulbricht, surprising details about what it’s actually like to be raided by a SWAT team are revealed:

Splayed out on the carpet, Green was eye level with dozens of boots: A large tactical team — SWAT and DEA agents — fanned out through the house. He could hear things crashing, some officers yelling, others whispering to each other. He looked at the busted door and thought, Man, that thing was unlocked. On the living room wall hung family photos of his wife, Tonya, their two daughters, and a grandson — smiling brightly above Green, lying amid $27,000 worth of premium flake. (The package was stamped with a red dragon, the symbol for high-quality Peruvian.) Over the whole scene was a needlepoint that said: If i had known you were coming, I would have cleaned up! Excited by the company, little Max stopped shaking just long enough to crap right in the living room.

And that was one of the moments when everything went to shit for the Silk Road.

More like this
Science
9 hours ago
How are drugs absorbed in the body? The science of medicine, explained
By Tom Anchordoquy and The Conversation
Entertainment
6.21.2022 3:46 PM
Stranger Things 4 Vol. 2 trailer just solved a huge Eleven mystery
By Alex Welch
Entertainment
7 hours ago
Westworld Season 4 theory may reveal a shocking Dolores twist
By Mónica Marie Zorrilla
Related Tags
Share: