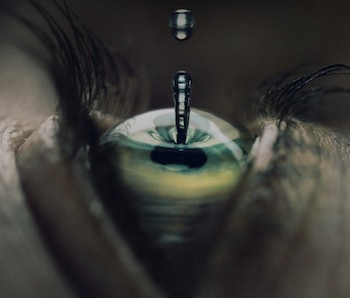 In USA Network’s new drama, Falling Water, three seemingly unrelated people dream three separate parts of the same dream. You guessed it — they’re fated to meet, and piece together a mystery that involves an MIA girlfriend and a lost kid.

The plotline is inspired by four leading theories about why we dream, Neuroscience Professor Moran Cerf says (a fifth theory suggests we dream for no reason at all, but for the sake of argument, we’ll ignore that one). “The television show combines these theories and says, ‘Okay, if your dreams are trying to tell you something, what would they say?’” he told Inverse. “The creators started working on the show at the perfect time; it’s only in the last 10 years that dream research has begun to pick up.”

The oldest theory about why we dream was championed by Carl Jung and Sigmund Freud. The two suggested that dreams represent the emotions we suppress throughout the day: “Your guard is down and you have less energy to bury how you feel,” Cerf says, inciting a sort of emotional healing that allows dreamers to get in touch with their feelings in a mentally safe space. A complementary theory proposes that dreams are somewhat of a remixed memory playlist for the brain while it’s on minimal power mode.

On the other end of the spectrum is the premise that dreams are actually sort of a way for us to plan for the future, not dwell on the past like Jung and Freud thought. Cerf explained that these theories figured that dreaming was a simulation that let us practice for future outcomes in a safe space. This might be why we remember our nightmares more frequently — and vividly — compared to more pleasant, sweet dreams.

And this could also be the foundation for Falling Water: People in the same geographic setting are more likely to dream of similar things because neighborhoods tend to contain residents in a similar stage of life struggling with the comparable socioeconomic factors.

“It’s not that we know what is actually going to happen to tomorrow,” says Cerf. “But it does feel like a real experience in the brain. We really think we are there, we don’t question it, and when we wake up, our brain may retain some of that experience, which could potentially help us in the future.”

The fact that the brain can’t actually predict exactly what future may occur, doesn’t stop some us from believing that it can. In a June 2016 study conducted by the USA Network and reviewed by Cerf, millennials and Generation Z adults in a 1,000-person sample claimed that they frequently had “predictive dreams.”

The sample also revealed that people who identify as “right brain” typically had more vivid, frequent dreams than “left brain” people. Generation Y and Z people who come from multicultural families appear to remember dreaming the most, while people who are heavy users of technology report having the most vivid dreams compared to the general population.

Probably the most telling part of this study is that 83 percent of the subjects believed that their dreams actually contained important clues about their subconscious. “Nothing can beat your brain creating reality,” Cerf argues. Who needs alternate realities, after all, when you can just dream?