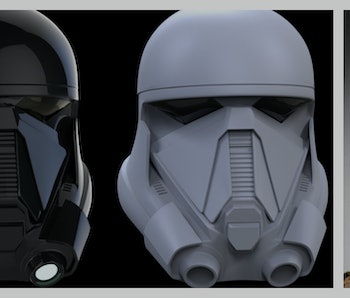 The ominous Death Troopers in Rogue One have served the Empire much longer than we thought — so much longer, in fact, that they could be original clones left over from the Republic. And that means their DNA could be identical to one of the deadliest bounty hunters in the galaxy: Boba Fett.

In the new Rogue One trailer’s flashback sequence, we see Krennic in a stand-off with Galen Erso, Jyn Erso’s father, as a very young Jyn watches. Now, this is only conjecture, but Jyn looks pretty little, like less than 10-years old. Krennic’s imperial uniform is also a little less-crisp than it has been in contemporary scenes, making all of this seem like it takes place at the very least 10 years prior to the events of Rogue One. Now, previous trailers have said Jyn was “on her own since the age of 15,” but she doesn’t look 15 here, so that line probably refers to her mother being out of the picture, too. This scene, meanwhile, establishes Jyn probably hasn’t seen her dad since she was around 10, or younger.

What does all this mean for the Death Troopers? Well, if we put adult Jyn’s age in Rogue One at exactly 20 (which seems really low, honestly) and this scene is totally 10 years before that, that means we’re seeing world in which it’s only been like eight years since the Empire was even established. And if Jyn is closer to 25 (which seems more likely) then this scene could take place close to four or five years after the end of the Clone Wars.

If only 4-10 years have passed since the events of Revenge of the Sith when Krennic convinces Galen to start working on the Death Star, then those Death Troopers hanging out could very easily still be clones left over from the time when the Empire was still “the Republic.”

Current Star Wars canon claims that most of the stormtroopers in the classic era were conscripts or recruits, but that there were still some clones around. If this flashback takes place as long as 15 years before the events of the new movie, then the Death Troopers are almost definitely clones.

Of course, the original Clone Troopers were created from Jango Fett’s DNA. Jango had one exact clone made (with no behavioral or developmental alterations) — Boba Fett, who he called his “son.” If Krennic’s Death Troopers are his own personal detail of thugs dating back to a time just after the Clone Wars ended, then there’s every reason to believe the Death Troopers are particularly vicious clones of Jango/Boba Fett.

It’s pretty unlikely that Rogue One will confirm or deny this, but that doesn’t mean the mystery of the faces under those helmets won’t be revealed in a future episode of Rebels or in-canon Star Wars book very soon. Until then, our money is on these guys being left over from a time when “Order 66” was the word of the day and killing Jedi was all the rage.