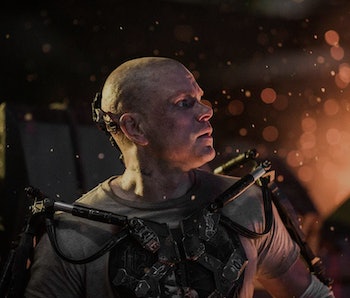 During his glitzy presentation, entitled “Making Humans an Interplanetary Species,” to the International Astronautical Congress, SpaceX CEO Elon Musk outlined his vision for humanity’s colonization of Mars. No surprise, his plan includes a perpetual fleet of SpaceX rockets, which he dubbed the Interplanetary Transport System (ITS).

SpaceX admittedly doesn’t have the cash to do all this on its own, but it does have another important ingredient: chutzpah. The whole point of the speech was to catch the eyes of other billionaires and entice them to help fund SpaceX’s crazy experiment. But what happens if it all goes according to plan, and Musk’s strategy for sending ships to the red planet every 26 months — which he wants to begin in 2024 — actually works? Well, it could lead to even greater economic inequality, a scenario already laid out for us in the 2013 film Elysium.

Elysium was director Neill Blomkamp’s second feature film, coming on the heels of his breakout success with the 2009 Best Picture nominee District 9. What followed boasted several of the hallmarks of his first film, including incredibly detailed production design, tactical action, and Sharlto Copley. But Blomkamp also tweaked the Apartheid allegory of District 9 to focus more on socio-economic issues.

In the movie’s future world of 2154, the rich and powerful one percent of society lives on a technologically advanced utopian space station that orbits Earth. The artificial mini-planet is stocked with wonderful features and perks, including medical wonder machines that can cure disease, reverse the aging process, and regenerate new (and possibly dead) body parts. It also has gigantic mansions fronted by pristine lawns.

It sounds nice, but there’s a major price to be paid for all this luxury: The rest of humanity lives on a ravished and dilapidated Earth, plagued by overpopulation, pollution, disease, immigration, and conflict. In short, it was class warfare writ large and on the biggest blockbuster canvas an audience could imagine. It even starred everyone’s favorite actor, Matt Damon, as humanity’s formerly earthbound savior.

Whatever your take on the movie, it’s undeniable that Blomkamp was grappling with a nimble level of subtext that a lot of great science fiction stories tend to tackle. It isn’t just about an exoskeleton-powered Jesus figure sacrificing himself to save humanity. There are much larger questions at play, the primary one being what if people had the chance to leave Earth for a nicer utopia, provided they had the funds? Well, Musk’s ITS would make Blomkamp’s science fiction into a reality.

Make no mistake, the ITS would be for the one percent. While still far off, the current asking price for a ticket right out the gate is allegedly $10 billion. But if the process were normalized over the following decades after the proposed 2024 start date, Musk estimated that tickets per person might cost $200,000 or the current average cost of buying a home. It’s within reach, but only for a portion of society with real money to burn.

Musk also estimated that establishing the Mars colony would take over 10,000 flights (not counting trips for equipment and supplies), and about 100 years in all to complete.

The daunting task is possible to pull off, though it’s not particularly like to happen, at least as he imagined it (though while Musk may not have Matt Damon, at least he has Leonardo DiCaprio to lead the charge). But forget for a second the logistics of getting the Mars colony up and running. If we’re at least letting hundreds of people leave our planet by 2124 for Mars, it might as well be Elysium except a few million kilometers more away from Earth. What initially sounds like Musks Martian idyll could soon develop into the kind of warning that Elysium espoused in its action movie framework.

Musk’s interplanetary intentions are initially altruistic (if this planet’s broke, then move on to the next one!), but knowing how every mad scientist story shakes out then this kind of thing will be subverted very, very quickly.

During his IAC speech, Musks reasoning was, “There are two fundamental paths [for humans]: One path is we stay on Earth forever, and some eventual extinction event wipes us out,” and continued, “I don’t have a doomsday prophesy, but history suggests some doomsday event will happen. The alternative is, become a spacefaring and multi-planetary species.”

The problem is that his plan would potentially cause a drastic socio-economic rift that would more likely than not lead to the kind of real-life class-struggle anarchy found in Blomkamp’s movie. After all, how does anyone unsuccessful down here successfully get up there? And without the tax dollars of the billionaires, how does anything get funded?

While promoting his latest film, Chappie, Blomkamp explained that he regretted certain aspects of Elysium. “I feel like I fucked it up. I feel like ultimately the story is not the right story,” he said. “I still think the satirical idea of a ring, filled with rich people, hovering above the impoverished Earth, is an awesome idea. I love it so much, I almost want to go back and do it correctly.” Here’s hoping Musk can do it correctly in real life.

More like this
Entertainment
18 hours ago
25 years ago, Nic Cage made his most explosive sci-fi movie ever — it was almost even better
By Jake Kleinman
Culture
6.28.2022 11:00 AM
5 years ago, the director of Parasite made his most unsettling sci-fi movie
By Allyson Johnson
Culture
6.28.2022 9:00 AM
8 sensational sci-fi shows and movies coming to HBO Max in July 2022
By Robin Bea
Related Tags
Share: