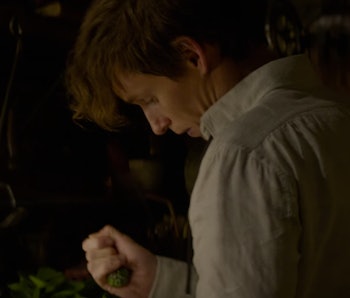 In the many Fantastic Beasts and Where to Find Them trailers, featurettes, posters, and Pottermore posts that we’ve seen in the last few months, a number of magical creatures have made pretty grand entrances. We always knew that the film was going to feature a lot of beasts and creatures, but through careful dissection of the trailers, we have a pretty good idea of exactly which creatures we’re going to see in Fantastic Beasts.

Some of the creatures we’ve seen before — they’ve appeared in a handful of images and trailers and have been highlighted by Pottermore. Others, however, are our best theories and guesses, based on what we’ve seen from trailers and images paired with research from the original Fantastic Beasts book.

Sure, most fans know about the appearances of the Occamy and the Demiguise by now, but we may also see some Mooncalves, Jobberknolls, Fwoopers, and Phoenixes in the film. Here’s what we think is going to appear in Fantastic Beasts based on what we’ve seen so far.

Seen in several trailers now, this creature is no secret. Though it’s a graceful and beautiful bird with snake-like body that can reach up to fifteen feet in length, the Occamy is actually quite aggressive, particularly when it comes to its eggs.

Eddie Redmayne revealed that Newt’s favorite creature is a Bowtruckle called Pickett that lives in his pocket. Bowtruckles are tree guardians, and though quite peaceful and even shy most of the time, they become very combative with anyone who attempts to harm their tree.

The Thunderbird doesn’t appear in the Fantastic Beasts book, but we know that it’s going to make an appearance in the film. Capable of creating storms, the Thunderbird is a giant golden bird with two sets of wings and a massive trailing tail. It’s also a relative of the Phoenix and lends its name to one of the Ilvermony houses.

Another beast that doesn’t appear in the Fantastic Beasts book, the Swooping Evil is bright blue and green and quote large. Described as “butterfly-like”, it’s only large when in flight, bursting forth from a tiny object that we see Newt tossing into the air in the trailers.

Exceedingly difficult to spot and capture because of its ability to become invisible at will, the Demiguise is sought after largely because of its silky silver hair, which is used to make Invisibility Cloaks. The Demiguise looks something like an ape with very large eyes.

Billywigs are bugs of “vivid sapphire blue” whose wings are attached to the tops of their heads. They move extremely quickly, making them difficult to spot, but they make their presence known by stinging, which cause giddiness accompanied by levitation in those on the receiving end of a sting.

We’ve seen a Niffler in several Fantastic Beasts trailers. A favorite pet of goblins that lives below ground, Nifflers are attracted to glittery, shiny things, which explains why the Niffler in the trailer is preoccupied with handfuls of jewelry.

The trailer gives us but a brief glimpse of the Erumpent, but it’s an immediately recognizable beast, as it looks a lot like a rhinoceros. Erumpents have very thick skin and great, sharp horns, and though they aren’t known for attacking unless provoked, they are destructive. Not only are they a threat when it comes to charging and their spell-repelling skin, but their horns are filled with a fluid that causes victims to explode.

It’s difficult to tell exactly what this beast is because it appears so briefly, but the closest match to the Fantastic Beasts book is the Nundu, which resembles a giant leopard. The Nundu’s breath causes devastating diseases, which might explain the bizarre expanding quality we see in the creature’s throat.

Another beast that appears slightly different than its describtion in the book, the Graphorn we see in the trailer is enormous and has many horns. Though it bears some resemblance to a horse or a dragon, it’s thick skin, like the Erumpent’s, repels spells. Graphorns are very aggressive, and though mountain trolls have attempted to domesticate them as beasts of burden, those attempts have usually been unsuccessful and marked by bodily injury.

The most recent Fantastic Beasts trailer gives us a peek inside of Newt’s suitcase. While there, we get a look at a bunch of beasts in quick succession. The Fwooper’s only visible as a flying blur for a split second, but its distinct, bright pink color is a pretty good indication that it is, in fact, a Fwooper. The Fwooper song is pleasant for awhile, but repeated exposure leads to insanity. *Fantastic Beasts says:

“Uric the Oddball attempted at one time to prove that Fwooper song was actually beneficial to the health and listened to it for three months on end without a break. Unfortunately, the Wizards’ Council to which he reported his findings were unconvinced, as he had arrived at the meeting wearing nothing but a toupee that on closer inspection proved to be a dead badger.”

Another bird we’re given a brief glimpse of may be the Jobberknoll. Their feathers are used in Truth Serums and Memory Potions, but the most distinct quality of the Jobberknoll is that it makes no sound at all until it dies, “at which point it lets out a long scream made up of every sound it has ever heard, regurgitated backwards. In the trailer, we see tiny, blue-ish birds (consistent with the described appearance of Jobberknolls). Their mouths are open, but we hear no sound. Very unusual, which makes us think these are baby Jobberknolls.

Though they look something like misshapen seals or living tombstones, the dark, four-legged creatures we see are likely Mooncalves (hence the big, full moon behind them). They’re described as having “four spindly legs with enormous flat feet.” Mooncalves are responsible for crop circles and their silvery dung is actually quite valuable as a magical, supercharged plant fertilizer.

In an earlier version of the trailer, we see Jacob open Newt’s suitcase only to be met with a smallish, pink, and apparently hairless creature launching itself at him. The best hint we have is something on the creature’s back. The book describes the Murtlap has having “a growth on its back resembling a sea anemone.” That seems pretty accurate. Beyond that, the Murtlap is described as rat-like, and from the brief glimpse we get of the creature, it looks quite a bit like a large, hairless rat.

There’s a possibility that it could be a Nogtail, though, described as resembling “stunted piglets, with long legs, thick, stubby tails, and narrow black eyes.” You decide.

We’ve theorized that the egg in Jacob’s hand might be a Phoenix egg, given the egg’s color, size, and incubation requirements. But the trailer also treats us to a scene in which something gold and glowing is moving under the ice on a frozen lake. Phoenix tail feathers are known to glow — might these birds also be capable of diving underwater? Even if the egg turns out to be a Chimaera or an Occamy, we may very well see a Phoenix in Fantastic Beasts, and it could very well be baby Fawkes.