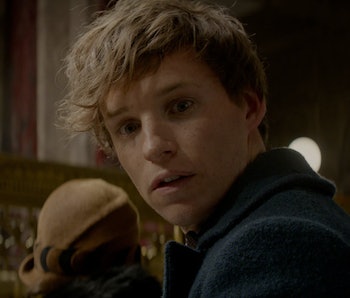 The official soundtrack for Fantastic Beasts and Where to Find Them could contain some beastly spoilers for Newt Scamander’s adventures in 1920s America. Thanks to the first track and full tracklist, we now have a lot of new information about which creatures Newt might be chasing, including a possible hint at the identity of the film’s big bad.

The tracklist came out on Pottermore, and it’s pretty intriguing. There are tracks called “The Demiguise and The Occamy,” “Gnarlak Negotiations,” and “The Obscurus.” Though we’ve seen the Demiguise, the Occamy, and Gnarlak in most of the trailers thus far, “The Obscurus” hints at a new creature or entity that we haven’t really seen before.

The Demiguise is perhaps one of the most rare and interesting magical creatures in the film. It’s graceful and peaceful, with large eyes and silky silver hair. A Demiguise can make itself invisible whenever it’s threatened, and its hair is used to make Invisibility Cloaks.

The Occamy, on the other hand, is quite aggressive. It’s a bird-like creature with a snake-like body that can reach up to 15 feet in length. Newt’s Fantastic Beasts book says that Occamies are known to carry off monkeys, and though the Demiguise isn’t terribly small, there’s a chance that it could find itself threatened by the Occamy under the right conditions.

The Fantastic Beasts tracklist also gives us a little more context when it comes to Newt’s involvement with Gnarlak — an infamous 20s-era goblin gangster. Will Gnarlak be of help in the rapidly devolving situation in New York City, with the wizarding community on the brink of exposure and a bevy of dangerous beasts on the loose? Or will he end up being a roadblock, hindering Newt, Tina, Queenie, and Jacob in their quest to save the lives of humans and magical creatures alike?

We have next to no information on the Obscurus, but it may very well be the big, dark, mysterious thing that’s seen wreaking havoc on New York in the trailers. We never get a good look at it, but we get the sense that something huge is moving around underground, destroying buildings, and taking over entire city blocks and subway stations.

For the most part, this thing appears as something of a wave of tendrils or swirls of cyclonic energy. It’s indistinct and without form, which sort of suggests that “The Obscurus” is a very good name for whatever it is. Perhaps this is a hint at the big bad for the film?

To make matters even more interesting, though, Newt’s Fantastic Beasts book was commissioned by Augustus Worme of Obscurus Books. The book was commissioned in 1918 and was the impetus for Newt’s years-long trip all over the globe to learn more about the world’s magical creatures. Fantastic Beasts wasn’t published until 1927, after Newt’s trip to New York. If something called the Obscurus plays a major role in the film, it can’t be a coincidence that Newt’s publishing house bears the same name.

Is there some degree of involvement from Worme? What, exactly, is the Obscurus and where did it come from?

We’ll find out exactly what the Obscurus is and how it factors into the plot of Fantastic Beasts when the film hits theaters on November 18. But if you’re having a hard time waiting, take a listen to the “Main Titles” theme from the soundtrack.

More like this
Entertainment
6.30.2022 5:01 PM
Everything we know about Dune: Part Two
By Gabrielle Bondi and Ryan Britt
Entertainment
11 hours ago
Here’s the one divisive Marvel movie you need to watch before Thor 4
By Jake Kleinman
Entertainment
2 hours ago
Stranger Things creators confirm spin-off series, a live-action Death Note, and more
By Eric Francisco
Related Tags
Share: