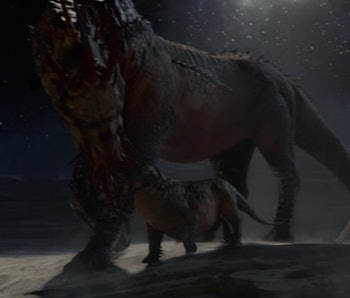 The new Fantastic Beasts and Where to Find Them trailer gives us a good look at some brand new beasts from the film, but one beast in particular has fans stumped. It’s not from the Potter films, and given a close reading of Newt’s Fantastic Beasts book, it can be hard to suss out what, exactly, it is.

According to the Fantastic Beasts book, Graphorns hail from Europe (the mountainous parts, specifically), and are large, aggressive animals with extremely thick skin and two very large horns. Not unlike Hippogriffs or horses, Graphorns are occasionally on the receiving end of domestication attempts. Mountain trolls have tried (and largely failed) to tame Graphorns as beasts of burden.

Graphorn horns are very valuable (because they’re difficult to come by) and are useful for a number of potions. But because Graphorns are known for their aggressive nature, wizards tend to stay far, far away from them. Their thick skin repels the vast majority of spells, making it difficult to defend oneself against a Graphorn attack should you find yourself in the very unfortunate position of pissing one off.

The Graphorn we see in the Fantastic Beasts trailer is a little different from the beast described in the book, though. It does have the described “greyish purple” skin, but it lacks a distinctly humped back and has more than the described two horns. Instead, we see a bevy of horns on its head (though they are long and sharp, as described), along with clear ridges along its back.

In the book, it’s described as having “large, four-thumbed feet,” and though it’s hard to tell exactly what the Graphorn’s feet look like in the trailer, they look more talon-like in nature than the book might suggest.

There are obvious comparisons to a Graphorn and a flightless dragon, but we won’t know too terribly much about the Graphorn until it appears in the Fantastic Beasts and Where to Find Them film, which hits theaters in November.