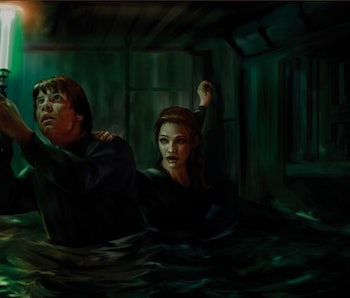 If Star Wars: Episode VIII does introduce Luke Skywalker’s wife, she won’t be someone to mess with. There’s no way that the hypothetical wife of a Skywalker would have been kidnapped by Supreme Leader Snoke — she’d be way too badass for that.

A recent Reddit theory asserts that Supreme Leader Snoke is keeping Luke “out of the game” by threatening to kill Luke’s wife, who — in this scenario — is imprisoned by Snoke. To be fair, redditor dcro1 tactfully admits that this theory relies heavily on Rey being revealed as Luke Skywalker’s daughter. And while there is something tidy about Luke being bullied into going into hiding by Snoke, it seems unlikely that any romantic partner of Luke Skywalker would allow themselves to be captured. Plus, it seems doubly unlikely that Luke would accept such a scenario as a reason to completely give up.

Obviously, it’s also possible that Luke Skywalker has never had a wife because he’s gay (Mark Hamill himself didn’t rule this out) or because he simply never married. In any case, Luke’s romantic life probably won’t play into why he’s in exile.

And yet. In the now-canned “Legends” continuity, Luke married Mara Jade Skywalker, a former Imperial assassin and formidable Jedi Knight. While the chances of seeing Mara re-canonized in the new official continuity seem pretty slim, Star Wars Rebels did recently retcon Grand Admiral Thrawn, a character who first appeared in the same novel as Mara Jada: Heir to the Empire.

In terms of giving us a good reason as to why Luke walked away from his friends and family, The Force Awakens backed the plot into a narrative corner. Sure, Ben Solo/Kylo Ren turning on Luke and murdering all of the students might be enough, but what if there was another piece to the puzzle? Many of us speculated that Luke was standing over a grave at the end of The Force Awakens, which might have been the grave of his wife/Rey’s mother. In “Legends” Han and Leia’s evil son — Jacen Solo — killed Luke’s wife, Mara Jade.

Kylo Ren already has a lot in common with his literary counterpart, Jacen, but that doesn’t necessarily mean he murdered Luke’s wife in addition to killing his own father. And if Luke Skywalker is revealed to have or have had a wife in Episode VIII, then there’s every reason to believe she’ll have something in common with Mara Jade. And that means her ability to evade capture and use the Force would be off the charts.