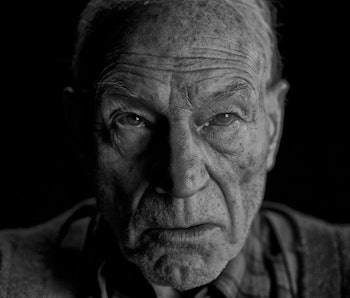 Age catches up to everyone, especially when you’re the perennially-stressed leader of the X-Men. Professor Xavier’s perfectly bald head almost seemed ageless, but just like Wolverine, the pressures of time have caught up to him in Logan.

The last time we saw Professor X was in X-Men: Apocalypse as a much younger version of himself (played by James McAvoy). But in Logan, someone hit the “fast-forward” button hardcore on Sir Patrick Stewart’s Professor X. It looks like Hugh Jackman’s Wolverine won’t be the only “Old Man” in the film, which will be a dark, bloody riff on the “Old Man Logan” storyline.

Alongside this confirmation of Professor X as a character, we now also know that Mister Sinister and the “Essex Corp” (featured in the after-credits scene in Apocalypse) will be the main villains to watch out for in Logan. Mr. Sinister, with his immortality, telepathy, superhuman strength, shapeshifting, and regeneration will be a formidable foe for Hugh Jackman’s last go as Wolverine.

We can assume that Mr. Sinister’s presence will be the main catalyst for the creation of Wolverine’s successor. Remember that Essex Corp took samples of Logan’s blood at the end of Apocalypse which is the perfect beginning for, say, a clone such as X-23, the female version of Wolverine (also confirmed to be in the film).

We’ll know more plot details as we get closer to the film’s official release on March 3, 2017.

More like this
Entertainment
6.28.2022 12:00 PM
Westworld Season 4 theory may reveal a shocking Dolores twist
By Mónica Marie Zorrilla
Entertainment
23 hours ago
Doctor Strange 2 Easter egg could reveal Fantastic Four's time-travel twist
By Eric Francisco
Entertainment
37 minutes ago
25 years ago, Nic Cage made his most explosive sci-fi movie ever — it was almost even better
By Jake Kleinman
Share: