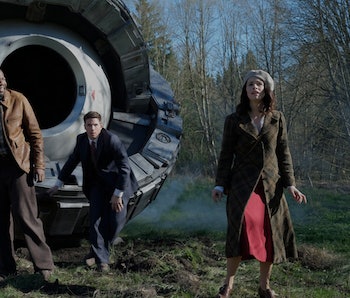 In the new NBC drama Timeless, the protagonists move through time via a time-travel pod that, as Vulture recaps, “apparently goes from zero to [insert year here] in like six seconds.”

The plot is irrevocably fantastical, but it didn’t have to be. The major science issue in “Timeless” is the problem of time — specifically, too much time. If time travel was possible, physicists hypothesize, it would happen in a time span way shorter than six seconds. In fact, it would most likely take place at the speed of light, a speed so fast it would allow a normal human to circumnavigate the equator 7.5 times in one second.

The idea that time travel would require a human to move at the speed of light has its origin in Albert Einstein’s theory of special relativity, which proposed that time slows down or speeds up, depending on how fast an object moves in relation to another. This theory has been tested — unsuccessfully — by various physicists, most recently by Robert Nemiroff, Ph.D. and David Russell, Ph.D. of Michigan Tech University. What they found in their 2015 experiment was that they couldn’t get their proposed spacecraft, represented in an equation, to move faster than light while still meeting the specific conditions that keep it from being destroyed. In short, a sluggish pod like the one in Timeless would never make it.

Another theory posited by physicists is that a wormhole could be used as a time machine. Caltech’s Kip Thorne, Ph.D., who was part of the team that proved Einstein’s theory of relativity with their discovery of gravitational waves, has argued since the 1980s that a wormhole could be the exact situation where this sort of object movement could occur. If one end of a wormhole accelerates at a higher velocity than the other, and an object enters the accelerated end, then it’s possible that, when it exits through the other end, it actually would be moved to the time before its first entry. It’s not just Thorne who thinks this is a possibility — in 2015, a team of researchers from Tsinghua University argued in Nature that it was theoretically possible to use wormholes to travel back in time.

The question, of course, is: How the heck would we even get in the situation to do that? For now, the closest examples we have to spyglass a future time travel are movies like Interstellar. The characters in Timeless may be changing the world, but if they existed in reality, their time travel pod would still be parked at home.

More like this
Science
5.8.2022 10:00 PM
Real-life time travel hinges on this one controversial scientific theory
By Barak Shoshany and The Conversation
Science
5.14.2022 7:00 PM
Why scientists think physics could be in for a reckoning
By Roger Jones and The Conversation
Innovation
5.8.2022 12:30 PM
How the new Large Hadron Collider experiments could change physics forever
By Sarah Wells
Related Tags
Share: