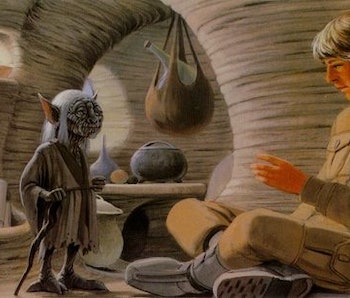 It looks like the middle child of the latest Star Wars trilogy might not hearken back to the infamous Empire Strikes Back as much as we thought: Even though Adam Driver was previously quoted saying the story of Star Wars: Episode VIII was similar to The Empire Strikes Back, that classic film is probably not the blueprint for the sequel to The Force Awakens at all.

In a new Vanity Fair interview, Adam Driver clarified his Empire Strikes Back comments saying, “Thats not even what I said. What I said was the tone of [Episode VIII] was different, I didn’t say that it was gonna be in the vein of [Empire] — I was using it as an example, so poor example. Next time I should say — I’m trying to think of another sequel to a movie that’s good.”

Driver highlights an interesting problem in talking about the possible storylines for new Star Wars movies: everyone’s rabid and overpowering love for The Empire Strikes Back and its monumental plot twists. In comparing a Star Wars sequel — or any sequel for that matter — to The Empire Strikes Back, there’s a quick assumption that parallel events will exist.

But, direct analogs between the characters and situations in The Force Awakens and those from the original trilogy aren’t really that numerous. Rey is not like Luke, and neither is Kylo Ren/Ben Solo. Luke Skywalker isn’t the same man he was in the original trilogy, and neither is his sister, Leia. While many fans might be expecting Luke to tell Rey “I am your father” in Episode VIII, there’s no reason to believe he really will, because this next film doesn’t need to follow the exact same story beats from Empire one bit.

What little we do know about Star Wars: Episode VIII indicates that it is going to surprise audiences. This doesn’t mean Star Wars is suddenly going to turn into a romantic comedy or have a strange unexpected crossover with Doctor Who. Mark Hamill has already said there are lines in Episode VIII’s script more memorable than “May the Force be with you.” And if Rian Johnson and the rest of the creative team are breaking new ground, then maybe someday, someone will compare an upcoming sequel to Episode VIII and not The Empire Strikes Back.