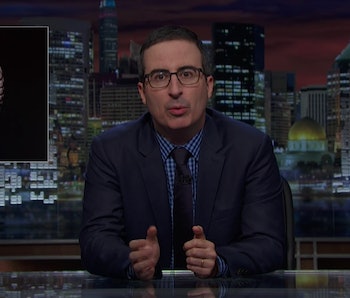 John Oliver has returned to shine a light on the poor relations between police and local communities. In an episode of Last Week Tonight aired Sunday, Oliver didn’t hold back as he attacked the shocking response to law enforcement injustices over the years, regularly blamed on “bad apples.”

“Snow White wasn’t afraid of apples until she took a bite out of that really bad apple,” said Oliver. “But I’m telling you, next time an old lady comes at her with a piece of fruit, Snow is gonna get the fuck out of there.”

The numerous killings of unarmed civilians, leading to nationwide protests, has led to a widespread call for greater police accountability. This, campaigners note, would enhance relations between police and communities as civilians can trust that officers face scrutiny for their actions.

A common refrain put forward is that there is less of an institutional problem in the police, and the issues rest more with the individuals. “A few bad apples” give law enforcement institutions a bad name, the argument goes. Oliver noted that the rest of the incomplete phrase is “a few bad apples spoil the barrel,” and putting this aside, there’s plenty of evidence that the issue lies on the institutional level.

The Department of Justice has consistently found flaws in internal departmental investigations, with one incident in July 2013 revealing that at least two cops shot and killed a suspect while said cops were under investigation over another shooting.

It’s even harder to keep track of these incidents. Across the 17,985 state and local enforcement agencies in the U.S., there is a startling lack of data on police shootings. One man, Phil Stinson, was able to better collect evidence by simply setting up 48 Google Alerts and measuring the incidents as they cropped up in the media.

Solutions like early intervention systems to spot troublesome officers, or bringing in outside prosecutors, have their merits, but one area that has seen great success is body cameras. “These cops aren’t M. Night Shyamalan,” Oliver said. “If they plead with you to let them have a camera again, you should give it to them!”