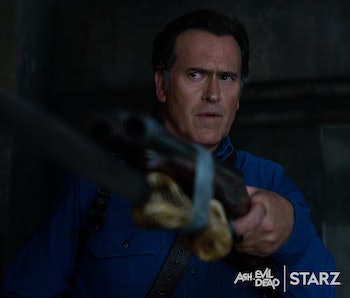 The Evil Dead franchise just keeps on clawing its way out of the grave. Season 2 of Ash vs Evil Dead premieres on Starz on October 2, and to say it’s been an improbable journey to get there would be an understatement. The second season of Ash Williams’s adventures fending off a bevy of demons known as Deadites delivers as many gallons of fake blood as it does laughs, but it’s a small miracle that a TV show based on a no-budget horror movie exists at all.

This isn’t a low budget hit that turned into a mainstream success that we’re talking about: 1981’s The Evil Dead, from insane/insanely talented mastermind Sam Raimi, was one of the most gloriously disgusting movies ever made. Its rabid fanbase has spawned a franchise that precipitated many of the bigger multi-billion dollar cinematic universes that rule Hollywood to this day.

The original movie was a straightforward horror film which took heaps of horror tropes and gave them a delightfully gross spin. The plot follows a group of college-aged city kids — led by a fresh-faced Bruce Campbell — on their retreat to an abandoned cabin in the woods. They soon make the mistake of reading weird incantations from a book they find that seems to be bound in human flesh, accidentally unleashing evil demon spirits that possess each character one by one. Rape by way of a tree, increasingly graphic hacked-off limbs, and a whole lot of blood follows. But the true influence of The Evil Dead franchise begins with its sequel.

The first movie found its footing after horror master Stephen King gave it his personal seal of approval, which got Raimi and producer Robert Tapert a meeting with hotshot producer Dino de Laurentiis, who essentially gave the pair the green light to make a more expensive version of their first movie.

1987’s Evil Dead II: Dead by Dawn, which follows every single beat of the 1981 movie, adds a lot of humor. By imbuing their horrific story of kids getting possessed by demons with slapstick horror comedy — like some uber violent version of Abbott and Costello Meet Frankenstein — Raimi and Co. effectively sealed the longevity of their story.

Ash suddenly losing a hand and replacing it with a chainsaw not only gave viewers an inappropriate chuckle, but it made their hero iconic. Their simple horror idea somehow became larger than life along with its main character.

Raimi got even more money, and even a Hollywood studio to release the third installment of the franchise, Army of Darkness, which entered even weirder territory by having Ash sucked into a time warp to fight Deadites in the Middle Ages. In the movie and to fans, Ash became a legend, and the franchise effectively reinvented itself again.

The franchise added the historical epic to its horror-comedy repertoire, and it all somehow worked because of the steadfast throwback spirit of not only Campbell’s character and performance, but also Raimi’s commitment to doing the unexpected. This room to breathe made it okay for the franchise to branch out into seemingly ill-advised areas, and endeared the fans to the multifaceted insanity of what began as a simple story of kids fending off demons on their vacation.

The Evil Dead franchise is self-aware, but never self-serious. That’s why it never entered self-parody like the Nightmare on Elm Street franchise, and hasn’t needed to go through the endless terrible sequels that Halloween has had to endure. It always stays fresh because it’s never one thing. Its that kind of thinking that allowed director Fede Alvarez’s straightforward horror remake of the first movie in 2013 without the central Ash character, or to even put forth the idea of the bonkers Ash vs. Freddy vs. Jason crossover that was being developed before Starz greenlit the much more sensible Ash vs Evil Dead.

The Evil Dead franchise remains fresh and exciting because it’s so persistent, but it never forgets to be fun. The way it transcends mediums perhaps most closely aligns it with the constantly proliferating Star Wars franchise, but it can’t dream of being that lucrative. And that’s ok. It started out as a weird little thing, and it should remain that way. Just because it’s a strange little horror idea doesn’t mean it can’t be king. And hail to the king, baby.