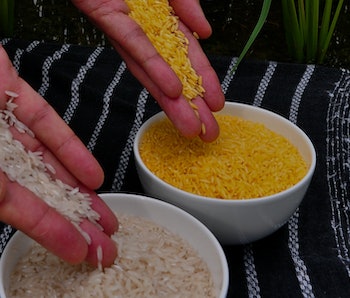 It was July 2000, and the cover of Time magazine boldly proclaimed, “This Rice Could Save a Million Kids a Year.” The rice was “golden rice,” a strain genetically engineered to produce beta-carotene in its endosperm, giving it a yellow color. The promise was that swapping this rice for varieties produced around the world would end vitamin A deficiency, which leads too commonly to blindness and death in poor communities around the world.

Here we are, 16 years and a lot of money from the Bill and Melinda Gates Foundation later, and some progress has been made towards reducing global rates of vitamin A deficiency, but none of it thanks to golden rice. Proponents will say this is because an anti-science, anti-GMO community has stifled forward momentum by spreading unwarranted fear over the safety of genetically engineered food. They bear the weight of responsibility for ongoing malnutrition and death, the story goes.

But there’s little evidence to suggest that anti-GMO sentiments have stalled the implementation of golden rice. In the one instance where activists destroyed a test plot of the rice, most of the protesters looked on in dismay as a small group of rebels committed the vandalism.

The fundamental problem with golden rice is not that people are afraid of GMOs, but that golden rice has yet to prove as economically viable as local varieties in the communities that would benefit from it. Golden rice solves vitamin A deficiency like global overabundance of food solves malnutrition — that is to say, it doesn’t, at least not without the appropriate local social policy interventions. In this debate, both sides are guilty of misrepresenting facts in order to turn their opponents into demons. Yelling “anyone who opposes GMOs wants children to die” is an easy way to shut down a conversation about what might be the most effective and efficient intervention on vitamin A deficiency for a given community. Yelling “GMOs will probably kill you and only exist to support the profit motive of big companies” ignores a wealth of evidence that modifying foods through genetic engineering is no more risky than traditional methods, and may provide useful tools to fight malnutrition, if used in ways that fit the needs of a particular group of people.

An enormous amount of resources have been dumped into the development of golden rice, with little to show for it. The project would surely have been abandoned for more straightforward vitamin A interventions long ago, if not for the fact that lots of people with lots of money and power have skin in the game. GMO companies desperately need some good publicity, as do the scientists who do research in the field of genetic engineering, supported financially in part by those same companies.

Research and development of golden rice should continue, in partnership with countries and communities who see it as one part of a plan to improve conditions for the poor and most vulnerable. But let’s stop pretending that it’s a silver bullet that would change the lives of millions overnight if only anti-science quacks would get out of the way.

More like this
Science
6.27.2022 11:00 AM
Letting your cat go outside could spread “life-threatening” parasites — new research
By Amy Wilson, Scott Wilson and The Conversation
Science
6.26.2022 11:00 PM
The powerhouse of the cell has a more complicated origin than we thought
By Viviane Callier and Knowable Magazine
Science
7.2.2022 12:00 PM
Why is my cat scratching furniture? The answer might surprise you
By Tara Yarlagadda
Related Tags
Share: