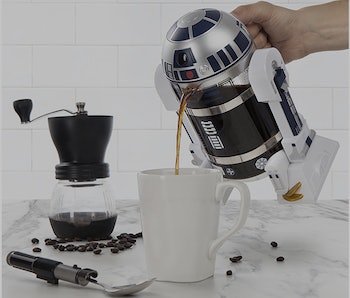 R2-D2 has performed many functions in the Star Wars universe — he’s hacked Imperial security systems, shocked intrusive Jawas, and carried secret Death Star plans for the Rebel alliance. But at some point in everyone’s career, you end up as the droid pouring coffee. And that’s exactly what’s happened to poor old R2-D2, so now he’s added barrista to his resume after his brief stint as a cocktail waiter in Return of the Jedi.

The ThinkGeek official R2-D2 coffee press turns an astromech droid into a simple utensil. It would be an affront to everything Star Wars fans hold dear if it weren’t also a beautiful way to get your morning cup.

The press is a 32-ounce plastic, glass, and stainless steel replica of Luke Skywalker’s favorite droid, except devoid of his usual innards and filled with steaming hot coffee. He can brew about four cups of coffee, which is French(or, Coruscant, maybe)-pressed. The coffee press is going for about $40 on ThinkGeek, which certainly costs less than the real thing (and is cheaper than a lot of other French press options as well).

Here he is serving up the steaming hot space-coffee.

Sure, it’s not exactly an orthodox idea, but it still makes more sense than when the Revenge of the Sith writers inexplicably decided that Artoo could fly.

It’s officially licensed, and you can buy one right here.