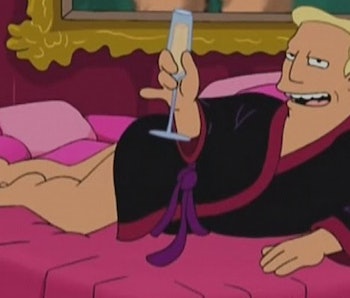 Pompous Futurama character Zapp Brannigan is funny, but Republican Presidential nominee Donald Trump’s comments during the first presidential debate were not. Thankfully, Brannigan voice actor Billy West took to Twitter once again as the infamous cartoon blowhard to recreate some of Trump’s choice quotes from the debate to try and make all of this a little less absurd.

For the uninitiated, Futurama’s Brannigan is a conceited pretty-boy starship captain whose crew absolutely hates him because of his vain, sexist, and idiotic comments. Sadly, this doesn’t sound all that exaggerated and is all too familiar (except for the pretty part).

West previously posted voiceover clips of himself reading Trump’s quotes about allegedly being well-endowed, about the alleged harem of unbelievably beautiful women surrounding him at all times, and having an allegedly genius IQ.

But West just posted two new clips as Brannigan echoing word-for-word Trump’s debate talk as he glibly fumbled through such difficult topics as cybersecurity and what it takes to be President. It’d be laughable if it weren’t real.

So, to take the edge off a bit, here’s West highlighting the Donald’s questionable use of the word “cyber”:

And why not throw in Trumps vague idea of the stamina it takes to be the President of the United States:

It’s great to know that one cartoonish buffoon could be so laughable, and the other is a supporting character from a beloved animated series.